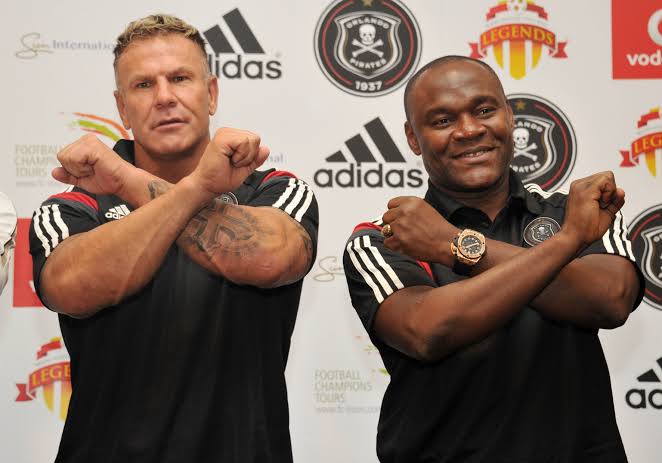 Orlando Pirates have sent condolences to the family and friends of their former player Marc Batchelor after he was gunned down outside his Johannesburg home on Monday night.

South Africans have flooded social media with messages of disbelief and shock after what appeared to have been a professional hit on the former Pirates‚ Kaizer Chiefs‚ Moroka Swallows‚ Mamelodi Sundowns‚ BidVest Wits and SuperSport United player.

Police have confirmed they are on the hunt for two suspects who were spotted on motorbikes fleeing the scene.

"From all of us at Orlando Pirates Football Club‚ we convey our heartfelt and deepest sympathy to the Batchelor family and pledge our profound moral support‚" Pirates said.

"We supplicate that God gives you fortitude at this moment of your extreme grief and pain."

The Bucs highlighted that Batchelor was one of the few players in the country who had the rare opportunity of playing for Pirates‚ Chiefs‚ Swallows‚ Sundowns‚ BidVest Wits and Supersport United.

Police investigating the purported "hit" on Marc Batchelor have obtained a statement from a passenger who was not injured when the striker's SUV was ...
News
2 years ago

"Not many players have the unique privilege of having played for all the top clubs in South Africa like Marc Batchelor did.

"Not only did the burly striker play for the Mighty Buccaneers‚ but he also donned the colours of Wits University‚ Kaizer Chiefs‚ Mamelodi Sundowns as well as Moroka Swallows in a career that spanned over a decade.

"Batch‚ as he was affectionately known‚ was not known for his speed or skill but played anything to his head and he was in a league of his own.

"Batch was part of the Pirates team that conquered the continent in 1995 where he featured in the first leg of the final against Asec Mimosas as a starter before being replaced by Bruce Ramokadi in the second leg‚ where he came off the bench in Pirates' famous victory over the Ivorian giants."

"The club is shocked and saddened to learn of the passing of former footballer‚ Marc Batchelor‚" the club tweeted.

Steve Lekoelea‚ who played with Batchelor at Pirates‚ also acknowledged his commitment as a player.

"He was a player who was always looking forward to the next training session.

"He wanted to win‚ and losing was not part of his vocabulary‚" said Lekoelea.