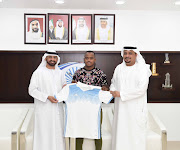 Ayanda Patosi has secured a second loan move to the Middle East after joining United Arab Emirates side Bani Yas for the 2019/20 season.

The Abu Dhabi-based side will have the chance to purchase Patosi outright after that‚ as they beat off attention from a number of other sides in pursuit of the 26-year-old.

Patosi will be reunited with veteran German coach Winfried Schäfer‚ who he played under at Iranian side Esteghlal last season before the latter made the switch to Bani Yas last week.

One of his first moves was to secure the services of Patosi‚ who had impressed with Esteghlal‚ but was priced out of a move to the Iranians on a permanent basis.

Schäfer led Cameroon to the Africa Cup of Nations (Afcon) title in 2002 and has worked in the Middle East‚ Thailand and Jamaica since.

Bani Yas was formed in 1982 and is a sports club that also includes volleyball‚ handball‚ table tennis and fencing.

The side finished sixth in the 14-team UAE Pro League last season and play at the 10‚000-seater Bani Yas Stadium.

They have never won a major trophy having yo-yoed between the top two divisions in the UAE‚ last winning promotion in the 2017/18 campaign.

They have also recently signed former Flamengo defender Luiz Antônio from Brazil‚ and have on their books Spanish forward Pedro Conde‚ but are otherwise made up of mostly home-based players.

He netted 23 goals in 31 appearances for the side last season.

Bani Yas open their season on August 22 with a League Cup clash against Al Sharjah‚ which should serve as a debut for Patosi.