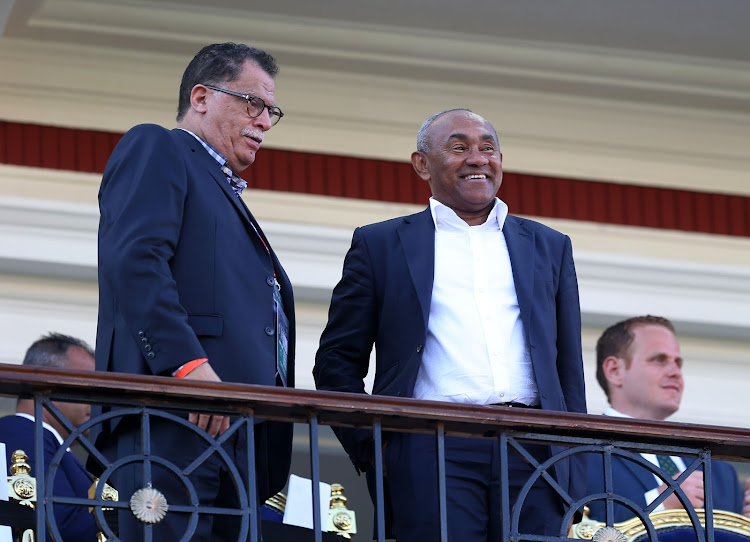 SA Football Association president Danny Jordaan (L) with the president of the Confederation of African Football Ahmad (R) during the Afcon last 16 match between DR Congo and Madagascar at Alexandria Stadium in Egypt on July 5 2019.
Image: Guy Suffo/BackpagePix

South Africa arrived home on Saturday having been knocked out in the quarterfinals 2-1 by Nigeria on Wednesday night at Cairo International Stadium.

They had shocked the hosts Egypt 1-0 in the last-16 in one of the upsets of the tournament with an inspired display.

Coach Stuart Baxter's ultra-defensive tactics in the group stage were criticised as Bafana scraped through as the fourth-best third-placed finishers with 1-0 defeats against Ivory Coast and Morocco and a 1-0 victory against Namibia.

"We last participated in Afcon in 2015. In that Afcon in Equatorial Guinea we dropped out in the first round‚" Jordaan said in Egypt‚ where he is remaining on until after the final on Friday‚ July 19 as he is a vice-president of the organising committee.

"In 2017 we didn't qualify. And now in 2019 we qualified. And so I think there was a low expectation of the performance of the team.

"Then second thing is that there were a lot of changes‚ and over a long period of time we wanted to see a settled first XI.

"I think this tournament has delivered to a great extent a team that showed that they could play against the best.

"Because who did we play against here.

We played against three teams who have been in the [2018] World Cup in Russia - Nigeria‚ Morocco and Egypt. And we lost to Morocco and Nigeria in the last minute‚ with errors on our part.

"But I think the team performed extremely well."

Jordaan said the victory against Egypt showed Bafana can compete with the best.

"The standout performance of course was against Egypt in a stadium packed with more than 70‚000 Egyptian fans‚ and against a team that came off three consecutive victories in the group stages‚" the Safa president said.

"So it was a huge match and a huge test for Bafana Bafana‚ coming from a group stage where we had three points as opposed to Egypt's nine.

"It's now history that it's probably the best performance of a Bafana team in many years. Mark Fish said he last saw such a performance in 1998.

"I think that showed us the capability and the best of what this team can deliver.

"And that helped us to begin to look at how we consolidate this team‚ and how we continue to build on that success.

"Against Nigeria‚ Bafana were tested because Nigeria were leading 1-0. And the test was could they come back?

"And they did. At 1-1 we really thought we were in with a chance‚ particularly since Nigeria then employed an outright defensive approach and paying long balls.

"But we have not been to a quarterfinal [away] since 2002. And a player like Percy Tau‚ I think was six years old then.

"So you can see the immense satisfaction and pride that the team had‚ particularly from the last two games.

"I think we have a team that everybody agrees can be one of the powerhouses on the African continent.

"We have players who can play. And that gives us a lot of hope in the team."

The draw for the qualifiers for the 2021 Afcon finals in Cameroon will be held in Cairo on Thursday‚ July 19‚ the day before the Egypt 2019 final.