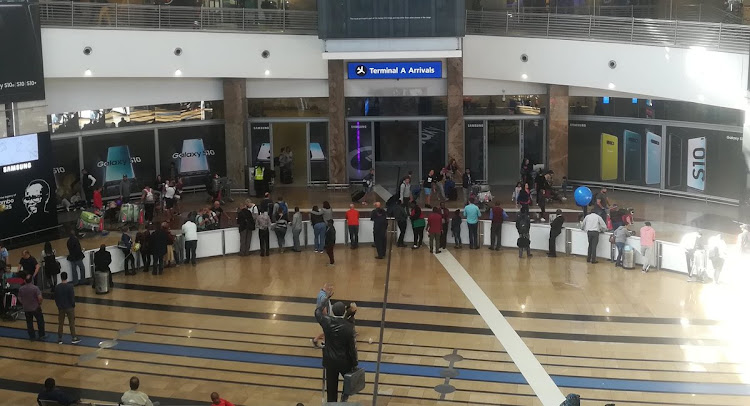 Looks like Bafana Bafana are going to arrive to a poor reception here at OR Tambo Airport.
Image: Mahlatse Mphahlele

Bafana Bafana received a rousing‚ hearty but ultimately undeservingly warm reception at OR Tambo International Airport when they returned  from their Africa Cup of Nations expedition in Egypt on Saturday afternoon.

Having been ejected from the continental showpiece in the quarterfinals after losing to Nigeria 2-1 on Wednesday at the Cairo International Stadium‚ the nation wasn't happy with the overall showing.

This is just about it in terms of fans who are here at #ORTamboAirport to welcome #BafanaBafana. pic.twitter.com/C8tNvheUsb

Of the five games they played‚ they won two and lost three.

They were the fourth of the four best-placed third-placed teams and needed favours from other teams to get through to the last 16.

There was nothing fortunate about their 1-0 Last 16 win that eliminate 3rd the hosts but they reverted to type in the Nigeria game.

By all accounts‚ they underperformed‚ especially with the kind of talent the team possesses.

While all it's always expected of a national team not to arrive on time‚ there was some commotion when the Kim Fields Academy group arrived from a dance competition in Prague‚ where they were greeted by an excited group of people.

Percy Tau was a hit with the fans and he reciprocated their warmth..... A good man pic.twitter.com/1VwZKY03md

Here we thought the national team were getting a rousing arrival‚ but as soon as the Academy completed their arrival formalities‚ normal international arrivals business resumed.

Such was the normality of it all‚ a passerby within earshot muttered:

It wasn't a tense atmosphere‚ but considering how Mothiba polarised opinions with his tucked in jersey and his performances‚ the comment could have well summed up the mood around the national team.

As the wait extended‚ a group of supporters came in bits and pieces. after a slight scuffle for t-shirts‚ they eventually burst into song.

One of the songs they sang was:"Zizojik'izinto... (Thula Bafana)... Wen'ukhalelani?"‚ which loosely means:"Things will change  (Stop crying Bafana)... Why are you crying?"

And yep, the national team is back in the country after exiting the AFCON 2019 at the quarterfinal stage after losing 2-1 to Nigeria on Wednesday. pic.twitter.com/vb5a0yWjji

Considering the angst Bafana often puts the nation through‚ the song was fitting.

When the team came in‚ the arrivals area was reasonably packed while the top two tiers also had some on-lookers.

Team captain Thulani Hlatshwayo was the first to appear then after a while‚ the rest of the team‚ led by coach Stuart Baxter‚ followed.

The cheers were loud‚ the players greeted and some of them took pictures.

They looked happy to be home‚ but  the tournament postmortem now needs to begin.