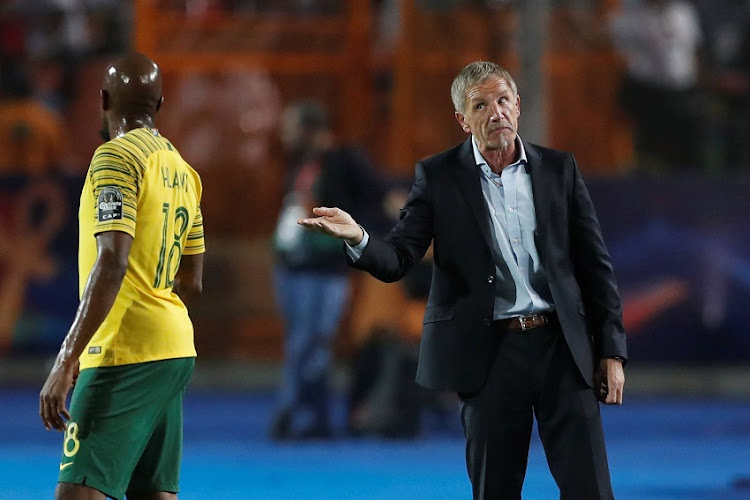 South Africa Football Association (Safa) president Danny Jordaan says he does not know if Bafana Bafana coach Stuart Baxter "is happy" still in his job‚ and that any decisions on his future will be taken after a debrief in Johannesburg.

Bafana left the 2019 Africa Cup of Nations (Afcon) after Wednesday night's 2-1 quarterfinal defeat against Nigeria at Cairo International Stadium on Friday night‚ arriving back in South Africa on Saturday afternoon.

Jordaan‚ as a vice-president of the Afcon organising committee‚ will remain in Egypt until after the final on Friday‚ June 19.

He said he and Safa's technical committee will examine the report-backs from Baxter and his technical staff before any conversations are had on the coach's future.

Baxter's contract runs until after the 2022 World Cup in Qatar. He has made indications for months that he may not remain in the Bafana job regardless of how they performed at Egypt 2019.

Jordaan was asked if Baxter is the man to lead Bafana to the Nations Cup in Cameroon in 2021 and World Cup in Qatar in 2022.

"Stuart Baxter and his technical team will complete their technical report and overall report on the team‚ its preparation and the experience here at the Afcon‚" the Safa president said.

"And that will be filtered to the technical committee‚ who will discuss and make the assessment and give us the report on how they see the next two years‚ into to 2022 and the Qatar World Cup‚ and the preparation to the 2021 Nations Cup in Cameroon."

Jordaan was asked if he had had a conversation with Baxter yet‚ and if he had a sense of whether the coach wanted to continue.

"Well‚ we obviously did not have that conversation. I think overall he is satisfied with the achievement of the team‚" Jordaan said.

"Is he happy? I don't know whether he's happy. But I think he is satisfied.

"When I spoke to him just before the Nigeria game he was positive about a result against Nigeria‚ and saying that if we could win that game probably we would make it to the final and probably win it.

"So he was extremely positive around the ability of the team. And also around how the team played. He was very happy.

"But we have to take the discussion beyond that‚ of what actually happened here.

"And we will do that when I get back to South Africa."

South Africa scraped through the group stage as the fourth-best third-placed finishers.

They shocked hosts Egypt 1-0 in the last-16‚ then lost against Nigeria.