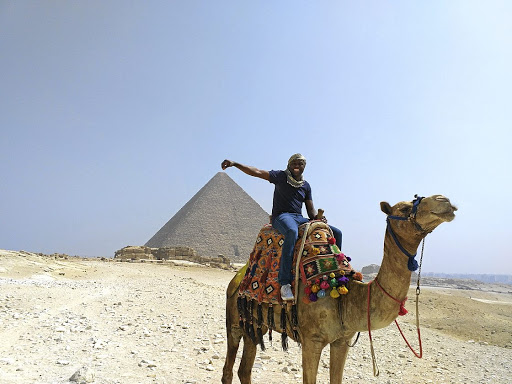 The first time I set foot in Egypt was in 2011 and admittedly, it was a wasted trip because I didn't see much of Cairo, the capital city.

It was a business trip and as a football writer, I followed Bafana who were in town for a 2012 Afcon qualifier against Egypt that ended goalless.

Another football visit in 2013 did not yield much either.

Things were different this time around. Cairo is a city that never sleeps.

You ask a shop assistant what time they are closing and the reply is: "I don't know, maybe midnight."

I can't resist shopping. So late one night I left my Amarante Pyramids Hotel in El Haram to Festival City mall, 35km away. When I was done I called an Uber. I knew I was in trouble when I realised Ahmed, the driver, had a rating of 4.6 (that's usually not the friendliest driver). You should be happier with a rating of 4.8 or higher. I requested to be taken to Amarante. At the "destination", Ahmed said I should pay 68 Egyptian pounds (around R60).

Sure, but this is not the place I was going to. He said, "okay, I see". It turned out this was another Amarante, on the wrong side of the massive city!

To cut the long story short, he said to go to the right address would be 200 pounds.

I had got lost the other day to the same place, so I knew to complete the trip would only be 40 pounds.

I told Ahmed to go jump into the Nile, paid his 68 pounds and then got out of his car. He was stunned because he thought with all the shopping I had done, I was going to be so scared around the area. Hello, this is Cairo, not Jozi!

Cairo is a very safe place, allowing for night time shopping and walking the streets.

Things I love about Cairo

I bought 10Gb of data for R223 through Vodafone.

Compare that with what you pay in South Africa,

One of the safest places I've visited, with police visibility.

Things I hate about Cairo

Reckless driving; the streets resemble an F1 contest, with no robots for safe crossing,

The bullies at the pyramids in Giza. They put their stuff in your hands and then the price negotiations start,

With 30-million people staying in the city, cellphone network is not always good.