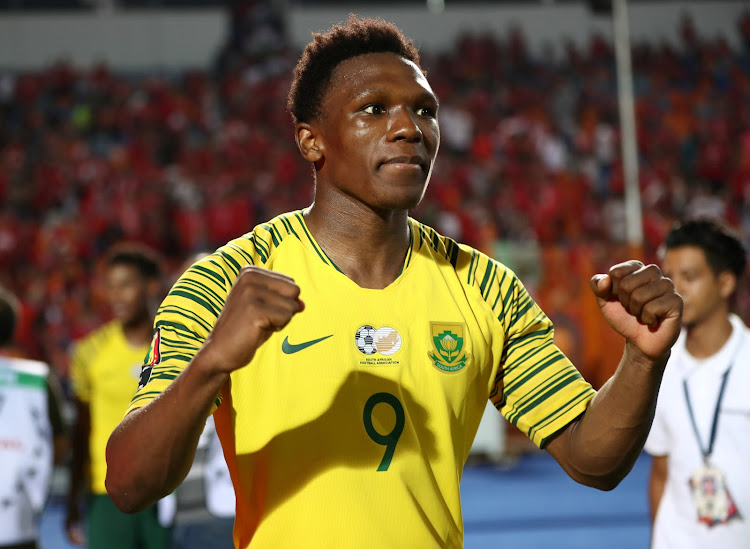 Lebogang Mothiba not only starred with an outstanding centre-forward's performance holding the ball up for fellow runners in Bafana Bafana's shock of hosts Egypt‚ his constantly tucked-in shirt has also become a talking point at the Africa Cup of Nations (Afcon).

Not all fans at home have always understood Mothiba's role as the highly-rated No 9 based at RC Strasbourg in France's Ligue 1 battled with little service while Bafana negotiated the group stages with conservative football.

He was far more in his element in South Africa's attacking 1-0 last-16 shock of Egypt at Cairo International Stadium on Saturday night‚ including a fine pass to put through Thembinkosi Lorch for the 85th-minute winner.

Bizarrely‚ it is Mothiba's constantly tightly‚ immaculately tucked-in shirt that has been a talking point in Egypt as much as his squeakily neat centre-forward play.

"This - I took that mentality when I was young. You know‚ when you were young you used to put the shirt inside the shorts‚" the affable Mothiba grinned at the Bafana team hotel on Monday.

"I took that mentality and said‚ 'OK‚ I'll keep this and grow with it'.

"So it's from when I was young until now. And everyone is talking about it - even in France.

"People are always talking. They say‚ 'Hey‚ look at that one - 90 minutes with his shirt in'."

Mothiba said he will not consider changing what is becoming his trademark appearance.

"Never. Never‚ never‚ never. No‚ I'll just keep it the way it is‚ and stay simple‚ and never change. This is my style‚" he said.

Mothiba's fashion sense has an added bonus - that defenders cannot pull as easily at his shirt.

"You know the tights - there are tights and shorts [over]. I put my shirt under the tights. That's why it's hard for a defender to pull it out."

Mothiba will look for another tidy display - in appearance and performance - when Bafana next meet Nigeria in their quarterfinal at Cairo International on Wednesday night (kickoff 9pm).