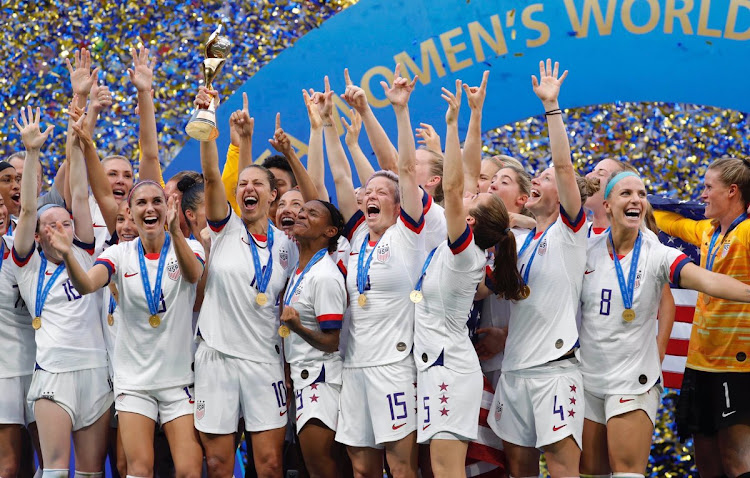 The US women's soccer team celebrate after beating the Netherlands 2-0 to win the Fifa Women's World Cup in France on July 7 2019.
Image: Fifa/Twitter

US President Donald Trump praised the women's national soccer team in the wake of their Fifa World Cup triumph on Sunday and said he would look into inviting them to the White House, just days after a spat with the captain.

"Congratulations to the US Women's Soccer Team on winning the World Cup! Great and exciting play. America is proud of you all!" tweeted Trump, who had exchanged barbs with player of the tournament Megan Rapinoe during the finals in France.

After Rapinoe, who led her side to victory on Sunday, told a reporter last month she would not go to the White House if the team were invited, Trump fired off a series of tweets saying: "Megan should WIN first before she TALKS! Finish the job!..."

"Megan should never disrespect our Country, the White House, or our Flag, especially since so much has been done for her & the team. Be proud of the Flag that you wear. The USA is doing GREAT!"

He went on to promise a White House invitation to the team "win or lose."

However, when asked by reporters on Sunday if Trump would invite the team to the White House, he said, "We haven't really thought about it. We will look at that."

English-born US national team coach Jill Ellis said she would not bet on an invite.

The United States duly claimed their fourth World Cup title with a 2-0 victory over the Netherlands in Lyon, with goals from Rapinoe and Rose Lavelle.

Former US presidents Barack Obama and Bill Clinton also tweeted their congratulations, along with numerous other politicians, athletes and celebrities.

Trump also waded into the female athlete pay debate, saying that he "would like to see" women paid as much as their male counterparts, but noted that further study was needed.