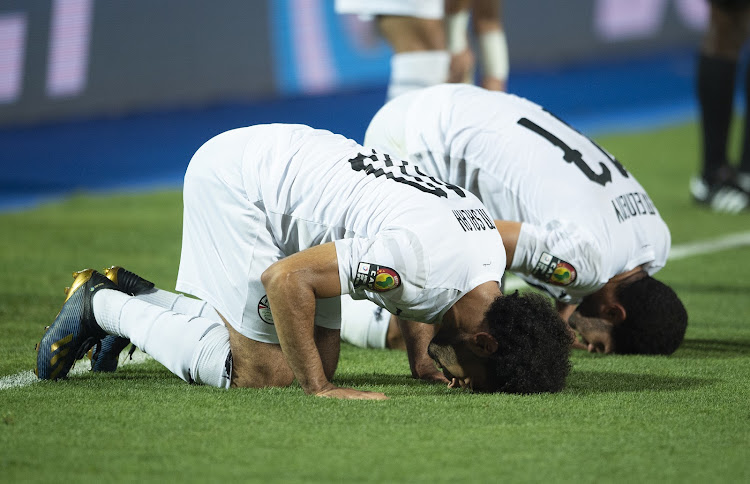 Mohamed Salah of Egypt celebrates his goal with Mohamed Elneny during the 2019 Africa Cup of Nations match against Uganda at Cairo International Stadium on June 30 2019.
Image: Getty Images/Visionhaus

Winning personal battles will be key for Bafana Bafana success in their Africa Cup of Nations second round clash against Egypt at the Cairo International Stadium on Saturday.

There will be massive clashes all over the pitch‚ with some of the players knowing each well from club competition over the years.

There are three duels that could be most important to Bafana’s chances of going all the way to booking a place in the quarterfinals.

Egypt tend to use Salah as a winger rather than a central forward and Hlanti will have to stick to him like glue or Bafana could be in perilous danger.

We have already seen in this tournament what can happen if Salah is given too much space and Hlanti must use his greater physical presence to out-muscle the Liverpool dangerman.

It is likely that Bafana will double-up on Salah with the left-sided midfielder tracking back too‚ but when the break is on it will be up to Hlanti keep the Egypt forward away from goal.

It is also likely that this will stop Hlanti moving forward as much as he usually would as he will be wary of the space he leaves behind.

Arsenal midfielder Elneny is an experienced campaigner who keeps things going in the Egyptian engine room with his quality passing game and ability to read the play.

Zungu looks short of match fitness after a season mostly spent on the sidelines‚ but he is also the perfect man to force Elneny into errors.

Zungu is a big unit and while not a ferocious tackler‚ has the wiles to see the game unfolding in front of him and position himself well.

If Elneny is allowed time and space on the ball‚ he can make Bafana pay with his incisive passing.

There are many that disagree with Percy Tau being played out on the wing‚ preferring him in a central role but that is where he is likely to play again.

It will see him come up against Aston Villa full-back and Egypt captain Ahmed Elmohamady‚ who is both a fine defender and potent weapon for The Pharaohs going forward.

Tau will have his hands full tracking back‚ but when on the ball will also seek to be the creative edge that Bafana have been missing in the tournament to date.

He will hope to escape the attention of Elmohamady‚ who is the most experienced player in the Egyptian team with 91 appearances to date.

Percy Tau wants to be the best version of himself‚ test himself against the biggest players‚ and learn as much as he can at the Africa Cup of Nations ...
Sport
2 years ago

Former Bafana Bafana coach Augusto Palacios feels the national team can count themselves lucky to have qualified for Afcon last 16.
Sport
2 years ago
Next Article