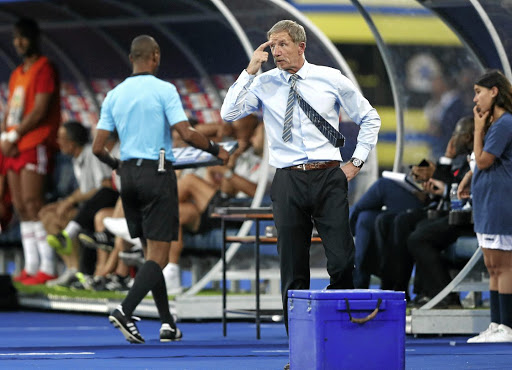 Stuart Baxter was not incorrect in his assessment that "there are many ways to win a game", and that Bafana Bafana could easily have snuck a result - a draw, of course, or even, at some stretch a win - in their final Africa Cup of Nations Group D game against Morocco.

A draw at Al Salam Stadium in Cairo would have guaranteed SA progression without having to get out their calculators to meet either Egypt at Cairo International Stadium on Saturday; or Madagascar, shock victors of Group B and 2-0 winners against Nigeria, on Sunday in Alexandria in the last-16.

Bafana were headed for a toughed-out stalemate before a free-kick was not cleared and fell to midfielder Mbark Boussoufa to smash in a 90th-minute winner for Hervé Renard's imposing Morocco.

South Africans have howled at Baxter's conservative football in a 1-0 defeat in searing heat against Ivory Coast and scrappy 1-0 win against Namibia, and now the loss against Morocco.

Some perspective is perhaps needed. Before the Morocco game a result for Bafana was written off as a no hope.

But, Baxter's tactic of inviting trouble in the second half - by sitting deep, is inexcusable.

Baxter, as he has grumpily and indignantly throughout the tournament, had a contrary view of it.

"I think that if we attacked Morocco, and played high with our backline, then Morocco would have enjoyed the game a lot more," the coach said afterwards. "I think the players played well in terms of their distances, angles, of pressing, defending crosses.

"And, if we could have played better in the last third and concentrated, we had situations. There are many ways to win a game of football.

"But losing in the last 30 seconds of the game from a set play that I think was very cheaply conceded, then I think it's not a time for me to start questioning the players."

The assessment of Bafana's group stage matches will be carried out in the coming days. But in a nutshell - too conservative against Ivory Coast; disjointed against Namibia and playing to counterproductive tactics in the second half against Morocco - is a lot, too much, for a coach to get wrong.