A die-hard Buccaneer with a passion for Bafana 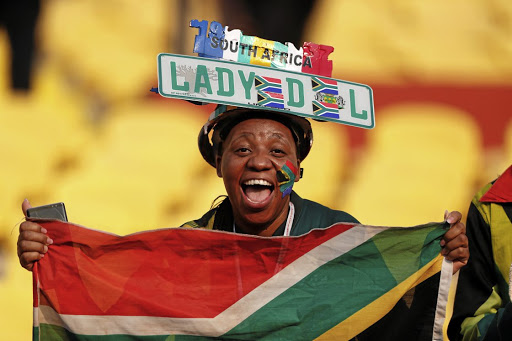 The trip to Egypt has cost Bafana Bafana supporter Dinah "Lady D" Matli R35,000 in flights and accommodation, but she wouldn't have it any other way.

A rose among the thorns, Matli, a die-hard Orlando Pirates supporter, can be seen in the company of Masilo Machaka and Sadaam Maake of Kaizer Chiefs, as well as Botha Msila of Bloemfontein Celtic.

With Bafana disappointing by losing two of their three Group D games at the Africa Cup of Nations here, Matli feels let down, but insisted she's got no regrets.

"Well, I don't think they performed to their utmost level, their body language is saying something else, I don't see much hunger in their performance," Matli told Sowetan.

But the pain of losing hasn't stopped her from backing the boys - a part of a small group that arrives at their spot at the stadium in dribs and drabs.

Sometimes they've been joined by Zimbabweans and the locals. Even though the number is nothing to write home about, Matli has soldiered on.

Even after Machaka returned home early for personal reasons and wasn't there for Bafana's 1-0 defeat to Morocco, the mother of two boys and two girls - the youngest just 15 months old, from GaDikgale, near Polokwane, remains vocal from the stands.

She was in fact recognised as the Fan of the Match during Bafana's 1-0 win over Namibia, which was some consolation for leaving her kids behind with her family, where she's the sixth born of 10 siblings.

Tactics in group matches left a lot to be desired.
Sport
2 years ago

"It's so disappointing to see such a small crowd from a big country like South Africa, while countries like Zimbabwe managed to bring fans and paid for their fares and accommodation but we hope in future they (SA) can bring as many supporters as possible to add the vibe to the stadium as supporters are a very critical 12th-player component," Matli continued.

"I feel great about my travels to the games because I am driven by passion and it's so deep that I don't want to miss any game."

Not only has Matli sacrificed her time with her children and she's also in a relationship, she's had to take leave from her job at Molemole municipality.

Even in defeat, it's still all worth it. After all, this is a Bucs fan and probably hasn't healed from their Telkom Knockout final defeat to her home province team Baroka and also missed out on the league to Mamelodi Sundowns.