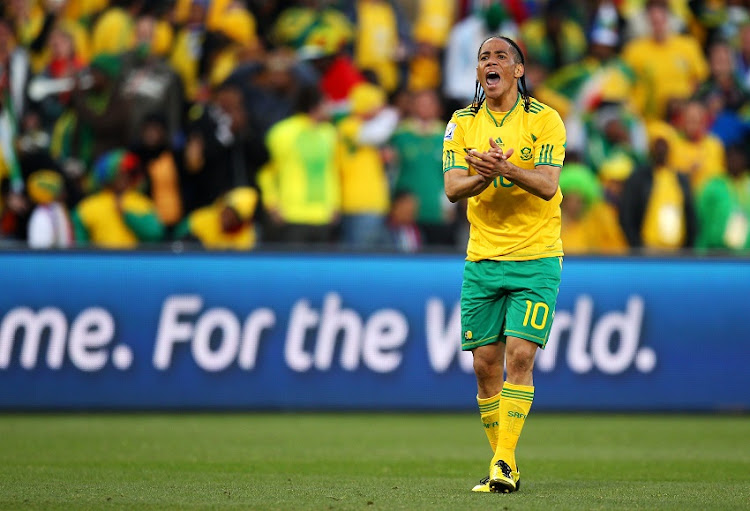 Steven Pienaar of South Africa urges his team mates on during the 2010 FIFA World Cup South Africa Group A match between France and South Africa at the Free State Stadium on June 22, 2010 in Mangaung/Bloemfontein, South Africa.
Image: Cameron Spencer/Getty Images

SA sports fans lashed out at retired midfielder Steven Pienaar after the former Bafana Bafana captain took to Twitter to make a comment about the odds facing coach Stuart Baxter's limping charges moments after their defeat to Morocco on Monday night.

Bafana's survival in the Africa Cup of Nations in Egypt hangs by the thinnest of threads after the 1-0 defeat to the Moroccans and while the team's performance at Al Salam Stadium incensed fans‚ Pienaar's tweet also put him in the line of fire.

"Time to take out the calculator‚" tweeted Pienaar in reference to the complicated permutations that Bafana now face.

The responses on Twitter were swift and brutal as the incensed fans came for Pienaar. They said his comment was misplaced as the Bafana team he captained was no great shakes either.

Some took things further and accused the former Everton player of turning his back on his country when Bafana needed him. The fans were relentless.

Some of them have clearly not forgiven Pienaar for resigning from the national team in October 2012.

ai monna we need solutions now not this. if you recall well it’s you and your gents who started this thing of subjecting us to difficult math.

The now 37-year-old former Borussia Dortmund‚ Everton and Tottenham Hotspur star wrote a letter to the South African Football Association at the time and said his body was tired after playing for Bafana for a decade.

He had captained Bafana under former coach Pitso Mosimane and he said he no longer wanted to be considered by then national team coach Gordon Igesund.

All of this may have happened seven years ago but try telling that to irate Bafana fans when they are in pain. "But you have no platform to say such statements we’ve beeeeen doing that since‚ also during your playing days chief‚" Lindokuhle Mtimunye responded.

It's bad enough that Bafana still do not know where they stand as far as the tournament is concerned as they now have to wait for Tuesday night's matches to see if they will squeeze into the Last 16 stage of the Africa Cup of Nations.

If the games go as expected Bafana will live on in the continental event‚ but nothing is certain at the moment and their continued Afcon participation is very much in the air.