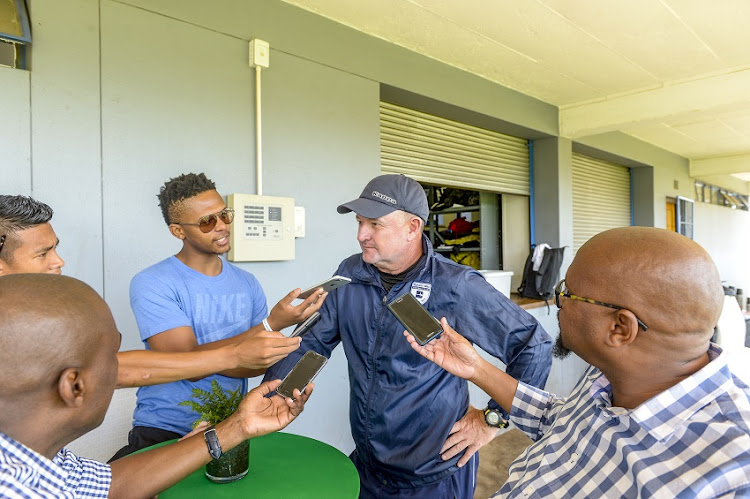 Gavin Hunt appears to be a popular choice to replace embattled Bafana Bafana coach Stuart Baxter but the BidVest Wits coach is determined to stay out of the furious debate.

Bafana face the possibility of exiting the Africa Cup of Nations in Egypt at the first hurdle and further participation in the continental event is no longer in their hands after the 1-0 defeat to Morocco on Monday night.

Fans have voiced their frustration with Baxter's tactics in the competition and Hunt's name has come up as many of them debate possible replacements for the beleaguered Briton.

But Hunt did not want to entertain the debate and said talking about the Bafana job when there is no vacancy at Safa House would be a sign of disrespect to the incumbent Baxter.

“I won’t talk about the national team job while there is a coach there‚” he said.

“For many years‚ my name has been linked with Bafana but to be honest my focus at the moment is on Bidvest Wits and our pre-season.

"It would be disrespectful to Stuart Baxter for me to go around talking about the national team job while there is a coach there.

"I would also feel disrespected if another coach talks about the Wits coaching job while I am still there.

"I am focused on pre-season because I need to build a competitive team for next season than thinking about Bafana.”

Hunt‚ who has won the Absa Premiership four times during his long and successful domestic coaching career‚ has extensive knowledge of South African football but has never been given the opportunity to lead Bafana.

He said he cannot control what people say about him and prefers to concentrate on his job at Wits.

“Obviously people have a right to say whatever they want to say about who should coach the national team‚ but that is a decision that must be taken by the powers that be‚" he said.

"My focus is on Wits because I am under contract.

"I don’t want to disrespect them (Wits management) either by talking about other jobs while I am still employed by them.”

“Everybody is concerned because of the results of Bafana and you know that everybody is an expert of what must happen going forward‚" he said.

"Like I said‚ I am focusing on assembling a strong team that will be competitive next season and that is where my focus is at the moment.”