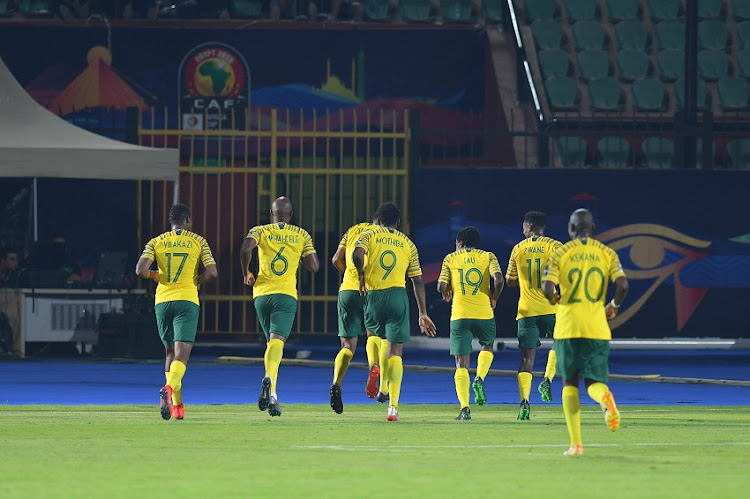 Bafana Bafana will be anxiously watching Tuesday night's matches at the Africa Cup of Nations to see if they will squeeze into the Last 16 despite only having managed three points and with a negative goal-difference.

If the games go as expected Bafana will live on‚ but a couple of surprising scorelines will see them on the next plane home and into what will likely be a storm of public discontent.

Guinea and DR Congo have already sealed two of the four berths for the best third-placed teams‚ with South Africa currently in third in that mini-table‚ ahead of Kenya‚ who they leap-frogged after the latter’s 3-0 defeat to Senegal last night.

But who will grab the remaining two spots is still very much up in the air with various scenarios still possible.

* If Benin get a draw against already qualified Cameroon in Group F (18h00 kick-off) then they will move to three points‚ ahead of Bafana with an even goal-difference.

Cameroon will be gunning for top spot in the pool though‚ with the runner-up in the pool to face Nigeria in the next stage.

* If Ghana are held to a draw by Guinea-Bissau in the other match in the pool‚ then they too will move ahead of Bafana (unless they remain second in the pool and go through automatically).

It is exactly the same scenario in Group E‚ where Mali have already qualified‚ but would like to retain top spot as when take on Angola (kick-off 21h00).

* A draw for Angola would see them move above Bafana on goal-difference‚ so Stuart Baxter will be pinning his hopes on the Maliens pulling through for him.

* Tunisia will be expected to beat Mauritania in the other match in the pool‚ which would do just fine for Bafana.

So as with Group F‚ the best-case scenario is that Mali and Tunisia or Mauritania win‚ which means Bafana would remain where they are in the table.

Essentially‚ Bafana would need two of these four results to go against them to be ousted from the best third-place finisher positions.

Of the eight matches played so far in the final round of pool games in Egypt‚ seven have gone to form/expectation – all except Madagascar’s shock win over Nigeria – which is a good sign for Baxter.

Should Bafana advance to the next stage‚ two very different opponents await them.

Who they would face cannot yet be determined but it will either be hosts Egypt in Cairo on July 6‚ or Madagascar in Alexandria a day later.

The latter scenario would leave them in the top half of the knockout stage draw‚ where Morocco and Senegal already loom‚ though those two powerhouses will face-off in an epic quarterfinal‚ should they make it that far‚ cutting one of them out of the competition.