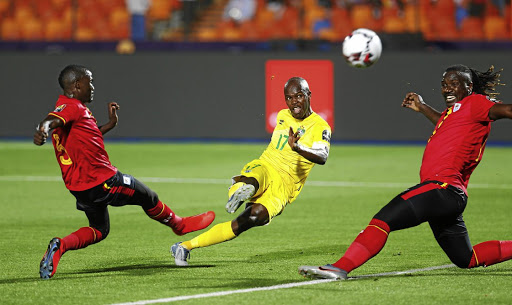 Zimbabwean striker and captain Knowledge Musona has been criticised for missing clear-cut chances against Angola on Wednesday. / REUTERS

Ex-Zimbabwe skipper Tapuwa Kapini has urged The Warriors to rally behind under fire striker Knowledge Musona at the ongoing Africa Cup of Nations (Afcon) in Egypt.

Musona, who netted five goals in the qualifiers en route to the finals in Egypt, has found himself at the receiving end of criticism after missing a spate of clear-cut chances in Zimbabwe's 1-1 draw against Angola on Wednesday.

The stalemate jeopardised The Warriors' chances of progressing to the knockout phase of the tournament, having lost the opener 1-0 to the hosts Egypt last week.

"It's difficult what's happening to Knowledge. We know he can bury those chances with closed eyes. It was not his day. Fellow players must lift him up. He must be supported," Kapini said yesterday.

Mamelodi Sundowns goalkeeper Denis Onyango's and Uganda have done enough to qualify for the knockout stage at the Africa Cup of Nations (Afcon) for ...
Sport
3 years ago

"We lose as a team, we draw as a team and we win as a team. So, let's not crucify our captain. We know what Musona can do. It is really unfair to criticise players."

Kapini, who boasts 11 national team caps, remains hopeful that his country can still advance to the last 16 of the continental showpiece. Zimbabwe face DR Congo in their last pool match on Sunday (9pm).

"It's not going to be easy, but I am positive that we can still do it [progressing through]. The DRC game is very important, it's a final for us. We can still finish second on four points, if Egypt beat Angola and we win against DRC by more than three goals or so," said the 34-year-old Kapini.

Even if Egypt do not beat Angola, winning against DRC would still put Zimbabwe in a favourable position to qualify as one of the four best third-placed finishers across the six groups.

Nigeria and Uganda are through

Denis Onyango was more than pleased to have won the personal battle with former Mamelodi Sundowns teammate Khama Billiat at the Africa Cup of Nations ...
Sport
3 years ago
Next Article