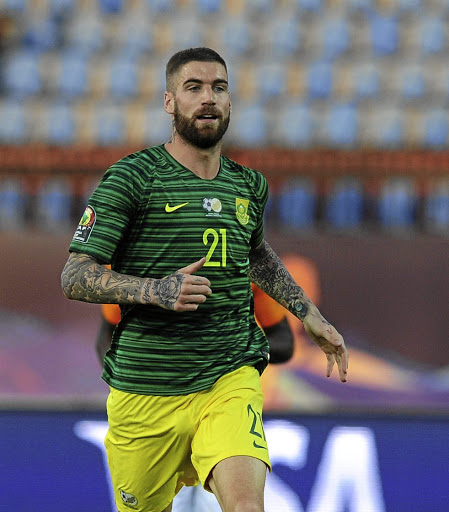 The last and only time Bafana met Namibia in the Africa Cup of Nations, there were goals aplenty for SA.

That's when Benni McCarthy international career blossomed and he hit a hat-trick against the Brave Warriors as Bafana went on to reach the final before losing to Egypt in Burkina Faso.

But Bafana would be the first to admit that so much has changed for the national team and regrettably, not for the better. In a desperate need for fire-power at the ongoing tournament in Egypt, Bafana could call upon the likes of Percy Tau and Lebo Mothiba, but there's also Lars Veldwijk in the picture, who hopes to play a part when they meet Namibia in tonight's Group D clash at Al-Salam Stadium (10pm).

Describing himself as a gentle giant despite his tough-boy looks - with tattoos on his arms, Veldwijk would like to bring in a fear factor to help get the goals if he gets a run.

"I hope they will be scared of me," chuckled Veldwijk, who was chatting to the media at the team's base at Novotel hotel in Cairo.

"We know what to do. The game against Ivory Coast doesn't matter if it was a draw, loss or a win. We still have to beat Namibia and everyone knows what to do."

Born to a South African father in the Netherlands, Veldwijk was first called up by former Bafana coach Shakes Mashaba three years ago for the Fifa World Cup qualifier against Senegal.

He seems settled in the squad despite the fact that he's not seen regular call-ups to the squad.

Veldwijk spends most of his time with goalkeeper Darren Keet and midfielder Dean Furman, but is also comfortable around midfielders Thulani Serero and Kamohelo Mokotjo.

Veldwijk, 27, believes he has an understanding with the rest of his teammates and when called upon, can combine with them to produce the goods.

He only played for eight minutes against Ivory Coast after he replaced Mothiba, but after scoring 24 goals in 36 league appearances for Sparta Rotterdam in the second division to help them win promotion to the top flight, he's not short of confidence.

"There's always pressure on a striker and it's nothing new for me when I play for my country or my club, yeah.

"People are expecting goals and that's why I came into the national team, because I scored many goals for my club," he said.

Lars Veldwijk is not so easy on the eye‚ but if you get the big Sparta Rotterdam centre-forward in the right areas he can score for Bafana Bafana‚ ...
Sport
2 years ago
Next Article