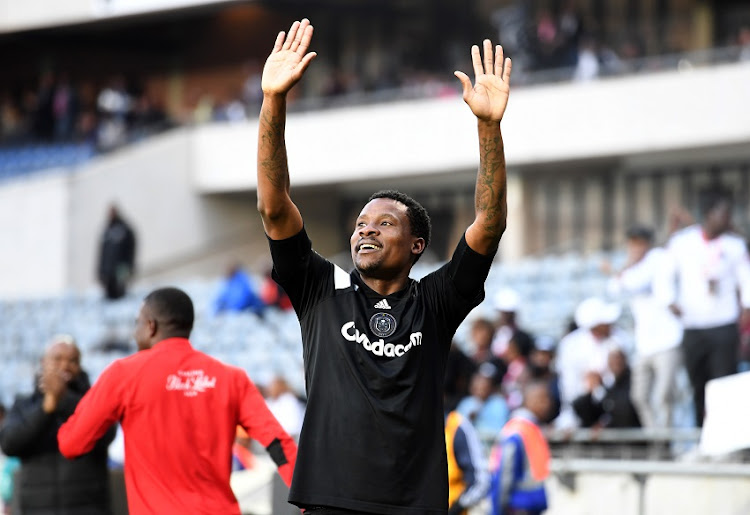 Gabuza joined Pirates from Golden Arrows at the beginning of the 2013/14 season after impressing with 23 goals in 88 matches for the KwaZulu-Natal outfit.

The gangling striker struggled for consistency in front of goals and regular game time at the Soweto giants with just eight strikes in 62 appearances.

The previous season for Gabuza was probably his worst in a Pirates jersey as he failed to find the back of the net in 17 appearances in all competitions with fans running out of patience as his impotency in front of goal intensified.

He will be remembered for losing his cool with the Ghost (Pirates’ fans) after they jeered him for missing a number of goal scoring chances in a match away at Black Leopards in October last year.

The 31-year-old said he leaves the Buccaneers with “wonderful memories and lifelong friendships” as he prepares to join his new team-mates.

“I would like to also especially thank the chairman (club boss Irvin Khoza) for the father figure role he has played in my life‚” said Gabuza.

Mahachi‚ who joined Pirates in June 2018 after an unimpressive stint with the selfsame Arrows‚ leaves the club he grew up supporting back home in Bulawayo‚ Zimbabwe.

He was introduced to the South African shores when Mamelodi Sundowns snapped him up from Zimbabwean giants Highlanderers.

Mahachi has somewhat also found it difficult to cement a regular place in the team.

He looked to have won the heart and trust of coach Milutin Sredojevic in the latter stages of last season.

The 25-year-old tricky winger scored goals in 19 appearances in all competitions last season for the Buccaneers.

Pirates have dominated the transfer market with the signing of several players as they bid to go better than the runners-up finishes of the past two consecutive seasons.

They have in the past week unveiled Tshegofatso Mabasa‚ Kabelo Dlamini‚ Bongani Sam (all from Bloemfonteion Celtic)‚ Fortune Makaringe and Siphesihle Ndlovu (Maritzburg United) and Tebogo Tlolane (Chippa United) along with French goalkeeper Joris Delle.

The Buccaneers assembled for pre-season on Monday.

They will open their Premiership season with a home clash against Bloemfontein Celtic on Saturday August 3 at Orlando Stadium in Soweto.