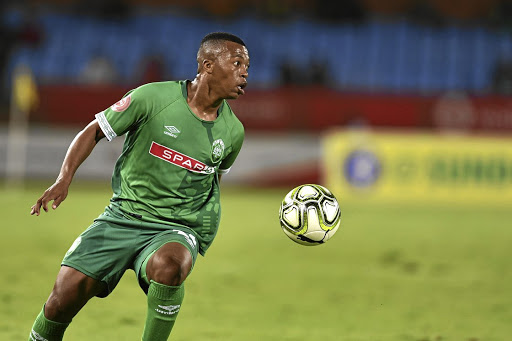 Thembela Sikhakhane, on loan from Orlando Pirates, will turn out for AmaZulu again in the next Absa Premiership season after renewing his loan contract.
Image: Lefty Shivambu/ Gallo Images

"I just want to play football, that's all."

This is how Orlando Pirates right-back Thembela Sikhakhane reacted when asked how he felt about
remaining at AmaZulu for his third loan stint.

AmaZulu confirmed over the weekend that they had reached a deal with Pirates for Sikhakhane to stay put for another season, making it his third temporary spell at Usuthu.

"I just want to play football, that's all. I know that I am a Pirates player but my focus is on helping AmaZulu do well in the new season," Sikhakhane said.

He had joined Bucs from AmaZulu's provincial foes Golden Arrows in 2016, but played only 14 games for the Soweto giants. In July 2017 he was transferred to Usuthu for his first temporary spell.

Nevertheless, the lad from Ulundi, KwaZulu-Natal, has not given up on commanding a regular berth in the Bucs XI in the near future. Sikhakhane still has two years left on his Pirates contract.

Orlando Pirates have signed French goalkeeper Joris Delle on a three-year deal‚ the Buccaneers announced on Monday.
Sport
2 years ago

"In football you'll never know what can happen tomorrow. I can still go back to Pirates and play regularly. I will keep on working hard," said Sikhakhane.

Pirates have had some success when it comes to loaning out their players and calling them back after impressing out on loans.

The likes of Innocent Maela (Thanda Royal Zulu), Thembinkosi Lorch (Chippa United) and Mthokozisi Dube (Bloemfontein Celtic) are the notable players who returned from loans and cemented their spots in the Sea Robbers starting line-up.

"I know they [Pirates] will notice my dedication. Players like Lorch and Maela were once in and out on loans, but look at them today. That is very motivating for me," noted the 26-year-old.

Sikhakhane has set his sights on aiding AmaZulu win at least one trophy in the impending campaign.

"The plan is to win something in the new season, and such a milestone would be very nice, because they have shown me so much love since 2017," stated Sikhakhane.