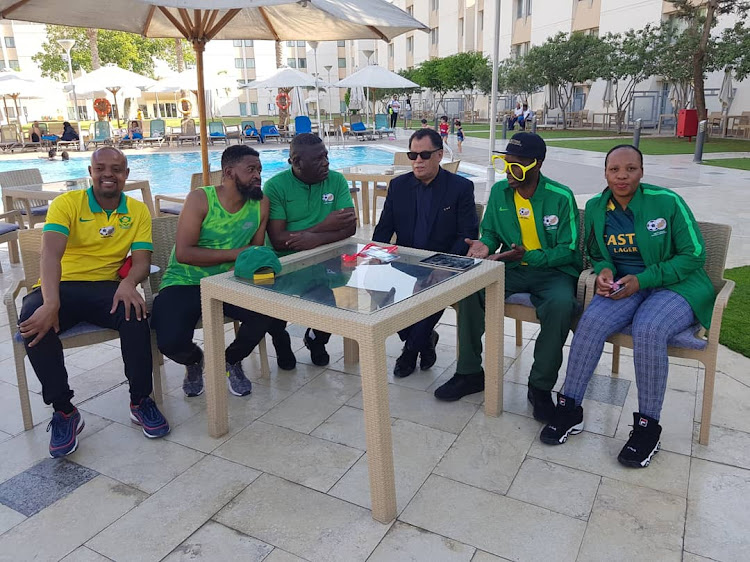 South African Football Association (Safa) president Danny Jordaan did not mince his words in Egypt‚ saying simply he was "not impressed" with the performance in Bafana Bafana's opening 1-0 Africa Cup of Nations defeat against Ivory Coast on Monday.

South Africa were structured‚ but offered very little in attack in the 37 degrees Celsius heat of their Group D opener at Cairo's Al Salam.

Jordaan countered the notion that Bafana do not quite have the players for this level.

"I was not impressed. Let me just stop at that‚" he said.

"Because it really is for the coaches to pick their team‚ to organise the formations‚ to instruct the players what to do.

"But of course that was not the performance that we expected from Bafana. And I think the players know that we were very unhappy.

"Because‚ you know‚ this team‚ you won't believe it‚ are one of the most feared teams on the continent.

"You speak to the Senegalese. The Senegal coach [Aliou Cissé] told me‚ 'There's nobody on the continent who can play against you. Take you on - passing‚ running'.

"He said‚ 'That's why what we do against Bafana is we stay at the back. You must have between four and six at the back - never less than four'.

"And you must know these defenders are big and strong‚ but slow. We have very quick forwards‚ quick-passing.

"And therefor the opposition must just stay back.

"But what they say is that from the 70th minute on Bafana will start making mistakes‚ giving wrong passes‚ losing passes.

"And he said‚ 'Then we will start hitting you on the counter and we will beat you'.

"And every team is employing the same strategy against us. I can tell you now that Namibia are going to do the same thing.

"They put six‚ seven at the back. Even Seychelles did it [in a 0-0 draw in the qualifiers].

"So now we have to‚ and it's not for me‚ but for the coaches to decide‚ adjust because they are going to sit back.

"Use the body. Sprint onto you. Every team has the same strategy against Bafana. And somehow the coaches must say‚ 'What are we doing about this?' You can't have the same thing in every match.

"But if they can deal with these issues‚ our team is one of the best on the continent.

"These are quality players. You still had Thulani Serero and Bongani Zungu on the bench - two of the best passers on the continent.

"It's not me saying so. You ask these coaches. They say‚ 'I wish I just had two midfielders like that'.

"But scoring goals is another thing."

Jordaan was asked what feedback he had from the Bafana squad on why they were so flat ion attack.

"He said‚ 'No‚ the ball didn't bounce right on the pitch. Because there were many times when the ball went under your foot'.

"I said‚ 'Percy‚ you can't change the grass‚ and Caf are not changing the ball. That's why you practise. Go and practise‚ and get it right'.

"The people who put this pitch are the same company who put the pitches for us in the World Cup. That's why you see the quality of the pitches here."

Bafana then play Morocco at the same venue on Monday at 6pm.