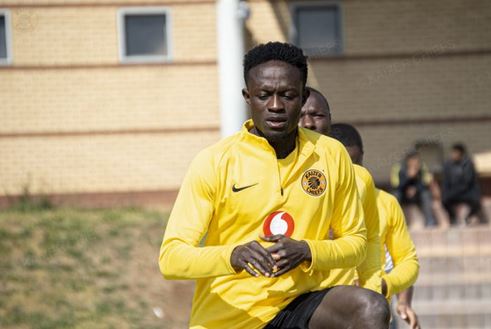 Kaizer Chiefs have acquired their second signing ahead of the new season with the announcement that defensive midfielder James Kotei has joined on a three-year contract.

The 25-year-old Ghanaian star arrives at Naturena from Tanzania giants Simba Sport Club and will compete for a place with the likes of Williard Katsande and George Maluleka. Madagascar international Aro 'Dax' Andrianarimanana has also been employed in that role.

Kotei‚ a holding midfielder who hardly loses the ball and can deliver defence-splitting passes and momentum-breaking challenges in midfield‚ has already joined his new team-mates at the club’s training base in the south of Johannesburg as Chiefs reported back for pre-season medical checkups and light training on Wednesday.

With an appetite to often burst forward with surging runs‚ he is in the mould of veteran midfielder Tinashe Nengomasha.

Chiefs posted a picture of Kotei in the gold and black training kit‚ which means the hard-tackling holding midfielder has already been introduced to his new surroundings of Naturena.

Chiefs will have a couple of training sessions on Wednesday before heading off to camp where they will play friendly matches against unnamed local and international teams.

Ernst Middendorp’s side will start their Premiership campaign with a trip to Tembisa to confront tricky Highlands Park at Makhulong Stadium on Sunday August 4.

Chiefs have released as many as eight players in the past weeks and hinted at the release of “two or more players” in the coming days.

Middendorp is under incredible pressure to deliver silverware for the Glamour Boys and he would hope that Kotei’s arrival‚ coupled with that of Zambian goal ace Lazarous Kamobole‚ will turn the fortunes of the club around and end an unprecedented four years without winning silverware.

Kambole was announced last week‚ also on a three-year deal.