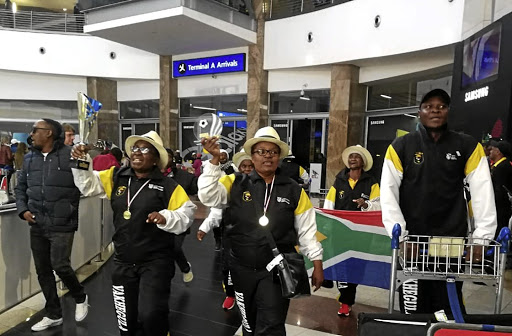 Innah Ngomane's four goals against the French grannies in an exhibition match during the Fifa Women's World Cup, was her way of meting out "poetic justice" on behalf of Banyana Banyana.

The team beat France's granny team 10-0 in a match that was played during the World Cup on June 19.

"Banyana had just lost before we played. I vowed that I would avenge for them, because they are our children. No mother likes to see their child suffer," Ngomane said.

The grandmother of 10 from Mpumalanga said she started playing football regularly after a team was formed in her community to keep the elderly active.

"Being part of the active gogos team keeps me young and healthy, so I don't suffer any chronic illness. I walked 10kms everyday and attended practice with my team so I could be fit for the game," she said.

Ngomane said she was thrilled to have boarded a plane for the first time, but found it difficult to raise funds for the Visa fees and attend the trials.

Vakhegula to show off their skills in France, Germany

Grannies hopeful to do well overseas
News
3 years ago

"I used my savings from my spaza, selling kotas and chips to learners, and requested donations from different stakeholders so that I didn't miss this once-in-a-lifetime opportunity."

"We extended an invitation to grannies across the country, but managed to hold trials in four provinces and selected the best soccer grannies from Mpumalanga, Limpopo, Western Cape and Gauteng," Mkhavele said.

He said they were proud of the grannies and that they were able to test their skills against their counterparts from another country.