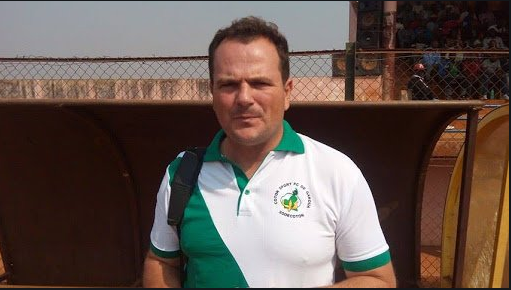 New Black Leopards coach Lionel Soccoia was announced as the new coach of Lidoda Duvha this week‚ taking over from Englishman Dylan Kerr‚ and will be assisted by former Kaizer Chiefs number two Patrick Mabedi.
Image: Via Twitter/@Pit_Matidza

New Black Leopards coach Lionel Soccoia has had something of a journeyman career around the African continent‚ but has enjoyed notable success in previous roles and has experience of continental football.

The Frenchman was announced as the new coach of Lidoda Duvha this week‚ taking over from Englishman Dylan Kerr‚ and will be assisted by former Kaizer Chiefs number two Patrick Mabedi.

In a surprise move‚ Leopards also announced that the well travelled Professor Ngubane will be acting as team manager in the coming season.

Soccoia began his career with French lower league side ROS Menton‚ where he coached between 2004 and 2009‚ before he became head coach and technical director of Benin second-tier side CIFAS de Djeffa‚ guiding them to the top-flight.

He took the side to fourth before the Benin league was abandoned due to a number of disputes between clubs and the country’s football association.

That saw him move on to Ivory Coast outfit AFAD Djékanou for the 2012/13 campaign and he helped them to a third place finish and qualification for the CAF Confederation Cup.

He guided AFAD past Sierra Leone side Diamond Stars in the 2013 Champions League‚ but they lost out to Cameroon side CotonSport 3-1 on aggregate in the next stage.

Soccoia was on the move again to Gabonese side CF Mounana‚ where he won the country’s Super Cup and finished second in the league in his first season‚ before claiming the Gabon FA Cup the following year and reached the third round of the 2015 Confederation Cup.

There they came up against Orlando Pirates and following a 2-2 draw in Libreville‚ lost 3-0 in Soweto as Kermit Erasmus netted a hat-trick.

It was a performance that caught the eye of bigger clubs and he headed to CotonSport for the 2015/16 campaign‚ where he finished runner-up in the league but disappointed with a second round exit to Stade Malien in the Champions League.

After a year spent at Dubai CSC in the Middle East‚ who he helped to promotion‚ he returned to the African continent to sign for Tanzanian side African Lyon‚ but lasted only two months after a poor start to the season.

He will hope to take Leopards into the top eight in the 2019/20 season‚ after they narrowly avoided relegation in the previous campaign‚ only securing safety on the final day.

Former Bafana Bafana coach Shakes Mashaba could be the next Black Leopards coach, Sowetan has learnt.
Sport
2 years ago

Dylan Kerr has confirmed that he has resigned as coach from Black Leopards and denied he has a four year contract with the club.
Sport
2 years ago
Next Article