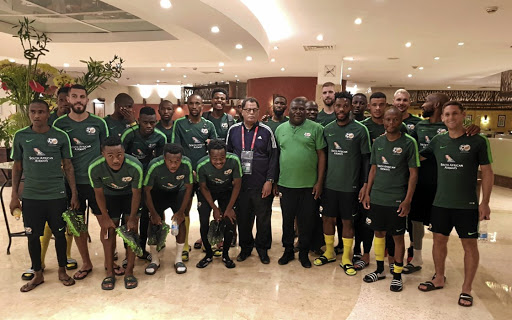 SA Football Association (Safa) president Danny Jordaan has reason to believe that the national team can put up a good fight at the 2019 Africa Cup of Nations starting today in Egypt.

Jordaan has pointed out that Bafana were one of the few teams to go unbeaten in the qualifying campaign that consisted of 12 groups.

The other nations that didn't suffer a defeat in the six matches in their respective groups are Senegal, Mali, Burundi and Guinea.

"First of all, I must say congratulations to all of you (for qualifying) and secondly, you are one of the few teams that have arrived in Egypt unbeaten in your qualification," Jordaan told the team at their hotel in Cairo when he visited them this week.

The Africa Cup of Nations kicks off in Egypt tonight, with South Africans hoping the national team will fare better than their counterparts at recent ...
Opinion
2 years ago

"Virtually all the teams, including Nigeria, lost a match in the qualification and that must say something about you.

"I think all of us saw in Libya [in the last qualifier] where it was required of you [to win] and you pulled through," he said.

With that, the Safa leader has backed the team to do well at the tournament in North Africa.

"We still talk of the 90 minutes of the 1996 [Afcon final that Bafana won 2-0 against Tunisia at FNB Stadium] years after and you have to create another 90 minutes three times in this tournament [in the group stage], so that our country can smile again - can talk again," he said.

"You must never underestimate the quality and strength of this team. You play football that I think every South African football fan would like to see, but the ball in the net is the most important thing. I just want to wish you all the best," Jordaan added.

Bafana carry the hopes of a nation that has gone through one disappointment after the other in recent times.

The U20 side Amajita were knocked out in the group stage of the World Cup in Poland recently and Banyana Banyana followed suit on the world stage in France.