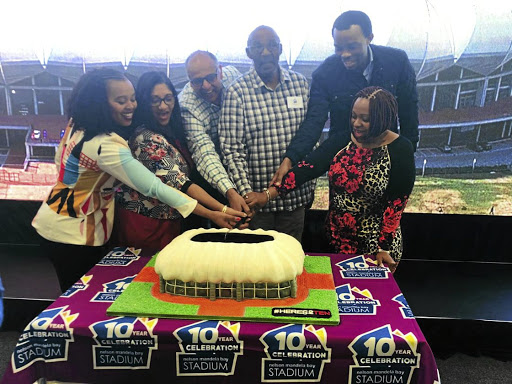 If the rumour mill is to be believed, Chippa, who utilise Nelson Mandela Bay Stadium as their primary home venue, are contemplating cashing-in on their top division status, with Ajax thought to be the favourites to buy.

However, this talk doesn't give the Mandela Bay Development Agency's (MBDA's) chairman Phil Goduka any sleepless nights. The MBDA is the Nelson Mandela Bay municipality's company that looks after the 2010 Fifa World Cup venue and oversees its day-to-day operations.

"We don't know about who's selling what. We have an agreement through the municipality with Chippa.

"We are not panicking, because we're looking at other activities to draw people into this stadium," said Goduka at the Nelson Mandela Bay Stadium's 10-year anniversary event, held at the stadium yesterday.

While insisting that the stadium wasn't only relying on Chippa to attract large crowds to generate revenues, Goduka didn't beat about the bush that if the Chill Boys really go, they will try to find another Premiership side to use the 46,000-seater arena as their primary venue.

"We must not make too much emphasis on soccer. The most important thing is that we can get other activities to be hosted here [at Nelson Mandela Bay Stadium]," noted the stadium's chairman.

The Nelson Mandela Bay Stadium is somewhat of a multipurpose astrodome as it also stages business exhibitions and music concerts.

Rugby team Southern Kings also use the venue as their main home as well.

Expelled Bloemfontein Celtic goalkeeper and skipper Patrick Tignyemb has confirmed that he has joined Chippa United‚ ending his nearly 12-year stay ...
Sport
2 years ago
Next Article