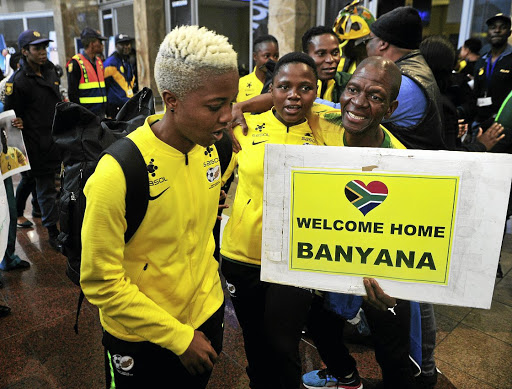 The South African women's football team returned to the country yesterday after they bowed out of the Fifa Women's World Cup without a win.

The team was welcomed home by a group of supporters following their historic maiden appearance at the tournament.

"A national league is anticipated to start, but my biggest prayer and hope is that players get overseas contracts," Ellis said at OR Tambo International Airport yesterday.

"It's important that players play and train consistently at a high level, not just internationally but in club football as well.

Banyana Banyana coach Desiree Ellis says her charges are able to hold their own against the world's best but tactical and technical shortcomings ...
Sport
2 years ago

"You can see the difference in our players who are abroad, they have matured and it's important for our players to take their game to the next level."

The 23-woman squad for the global showpiece had a handful of foreign-based players, including Linda Motlhalo, Thembi Kgatlana (both Beijing Phoenix, China), Jermaine Seoposenwe (Gintra Universitetas, Lithuania) and Ode Fulutudilu (Malaga, Spain), to name a few.

Banyana will next take part in the Cosafa Women's Championship in Port Elizabeth from July 31 to August 11.

The 32-year-old Banyana captain, Janine van Wyk, says the team has a solid foundation to build from for the next World Cup in 2023.

"We have experienced players and we also have the young blood coming through.

"The talent that has been coming through has been phenomenal," she said.

Banyana Banyana coach Desiree Ellis believes the side gained a new respect at the FIFA Women’s World Cup despite bowing out of the competition in the ...
Sport
2 years ago
Next Article