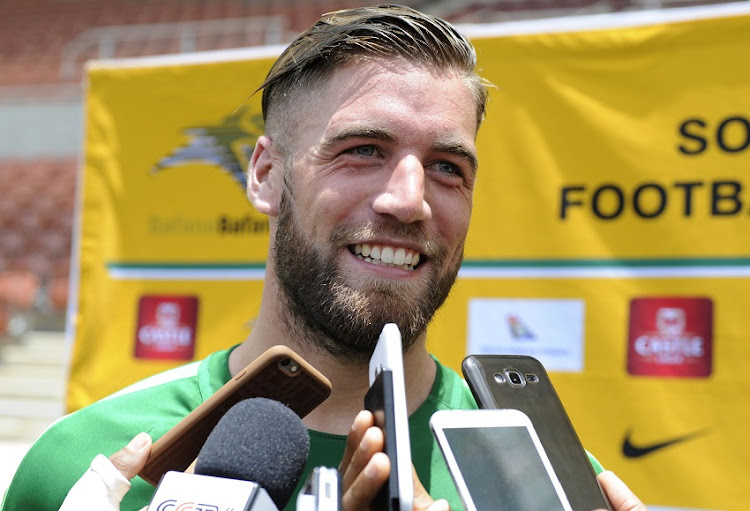 Bafana Bafana striker Lars Veldwijk displayed glimpses of his scoring prowess when he scored a hat-trick during a training game this week‚ prompting coach Stuart Baxter to say he would have a nice headache upfront in the Africa Cup of Nations.

Veldwijk's form will not come as a surprise to many after he had a good season with Sparta Rotterdam‚ the side he helped gain promotion to the Dutch’s Eridivisie (first division) after scoring 24 goals in 36 matches.

The Dutch-born SA striker is expected to fight for the Bafana jersey with Percy Tau and Lebo Mothiba‚ the two players whose goals helped secure qualification to the continental showpiece in Egypt.

“For me‚ it’s only to prove to the coach that I’m ready.

On Baxter’s pronouncement that his form gives him a nice selection headache‚ Veldwijk said he’s happy that he doesn't have the tough responsibility of selecting the team.

“That’s not up to me (as to who is supposed to start)‚ I just want to show the coach what I can do and I’m happy that I’m here‚" he said.

“We’ve had a good preparation‚ good week in Joburg‚ good week in Dubai and now we are in Egypt and we need to get things right‚ then it’s up to the coach who’s going to play.

“But I think we have a lot of quality in the team and all the 23 players are ready for it.”

On his hat-trick at training‚ Veldwijk said: “There were two nice follies.

"One goal was given offside but I don’t think it was.

Veldwijk said he was slowly adjusting to the way things are done in the Bafana set-up after earning two caps‚ including the last one in the final qualifier against Libya in March.

“It’s getting better and better and I came here for the first time two years ago‚” he said.

“I cannot keep saying I don’t know much about the African style‚ I know now and still it can be a lot better.

"And the guys need to know me a bit more but we are now together for three weeks and its getting good.”