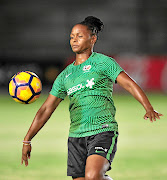 Banyana returned from France yesterday after being knocked out in group stages of what was their maiden World Cup. SA lost all their Group B fixtures to Spain (3-1), China (1-0) and were drubbed 4-0 by Germany in the last clash on Monday.

Banyana's rather unimpressive showing at the international spectacle has since seen some question Ellis's capabilities. SA's average World Cup display stretched their winless streak to 13 matches.

Banyana's last win came in November last year against Mali. "A lot of people are calling for her head, but for me I just want to see consistency. We are always a country that always rushes for results," said Dlamini of Ellis, whose contract expires in August next year after the Tokyo Olympics.

"I think her mandate was to qualify for the World Cup. The next step, I think, is to be consistent enough to qualify for the next one or win the Africa Women's Cup of Nations next time. I think it's still a bit premature [to call for her head]."

However, Dlamini sounded unhappy about Ellis's line-ups at the World Cup games. "If we would argue with her starting line-up at the World Cup, then it's something else ..." she said.