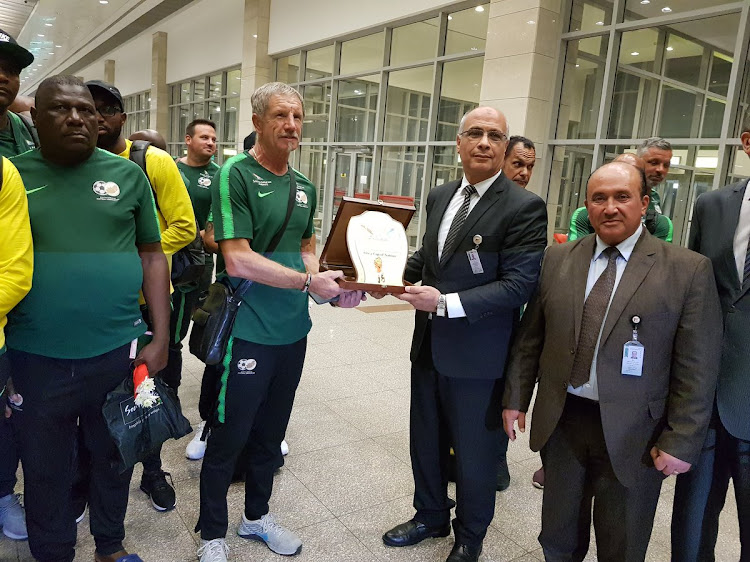 Bafana Bafana landed in Egypt on Tuesday morning ahead of the 2019 Africa Cup of Nations (Afcon)‚ and were greeted by the South African ambassador and staff from the embassy on their arrival.

The South Africans arrived in Cairo in the early hours of Tuesday morning and were set to have their first training session in the afternoon.

Bafana will embark on the third leg of their preparations in Egypt‚ after a week spent in a camp in Johannesburg‚ then a week in Dubai‚ where South Africa drew 0-0 in a friendly warm-up game against Ghana on Saturday.

SA meet Angola in a second and final warm-up match on Wednesday evening‚ ahead of their Afcon kickoff against Ivory Coast in Cairo on Monday‚ June 24.

Bafana coach Stuart Baxter‚ responding to a greeting by Ambassador Vusi Mavimbela‚ said the national team arrive in Egypt as a unified combination who will give their best at the Afcon.

“On behalf of the squad and the technical team I’d like to say thank you for the kind words by the ambassador‚” Baxter said.

“Thank you for the entire office pitching up to greet the lads.

“Sometimes when you call together an international squad you struggle to make it a team. We’ve had no problem with these players‚ bringing them under the same flag.

“Sometimes they bring with them flags from all over the world and we struggle‚ even though they’re South Africans‚ to get them playing for each other‚ respecting each other‚ and allowing each other to grow.

“But the strength of this squad is that when we play the other nations they will have that problem and we will not.

Bafana Bafana upon arrival in Cairo, Egypt on Tuesday morning for the AFCON 2019 tournament pic.twitter.com/4eYJIoh32B

“That we can guarantee.

“And I think that promise‚ every player sitting in front of me will give because he respects both his country and his team.

“So this version of Bafana will do it’s very‚ very best. And I think that guarantee should be good enough for every South African.”

Bafana‚ after their Group D opener against Ivory Coast‚ meet Namibia on Friday‚ June 28‚ and Morocco on Monday‚ July 1.