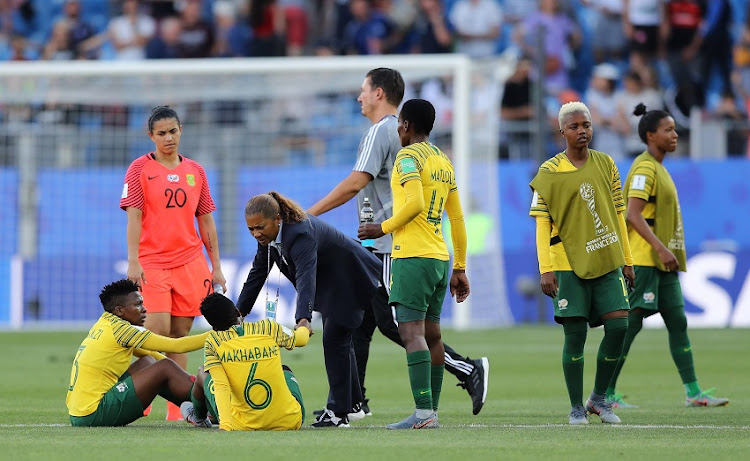 Banyana Banyana coach Desiree Ellis believes the side gained a new respect at the FIFA Women’s World Cup despite bowing out of the competition in the first round with three defeats.

A poor first half saw them slip to a 4-0 defeat to Germany in their final match on Monday‚ having also lost 3-1 to Spain and 1-0 to China in what was their debut at the global finals.

Banyana played some good football in the second half against the Germans‚ who are ranked number two in the world‚ and really should have come away with a goal.

‘We have gained a few supporters‚ even the German supporters were standing up and applauding‚ I think they so badly wanted us to score a goal for the chances we were creating‚” Ellis said.

“The players deserved that because they have worked really hard to show the brand of South African football that we can play.

“And‚ yes‚ we might not have got the results we wanted‚ but the people back home will be happy with the effort and the performance today.”

Banyana were 3-0 down at halftime as some sloppy defending saw them punished‚ which left Ellis frustrated as the side were well aware of the threat they were up against.

“We spoke about how dangerous they were from corners‚ that we needed to have more control of the ball and better marking‚ and that was poor‚” Ellis said.

“First goal was a free header‚ second goal a mistake at the back‚ third goal not tracking the runner … and I said if we win the central midfield battle we can win this game‚ and we did not do that in the first half.

“We also tried to play under pressure and we had no outlet when we wanted to play forward. That was huge‚ at times we just kicked the ball away.

“We had a couple of opportunities going forward‚ but then decisions in the final third were poor.”

Thembi Kgatlana had not been fit to start the game‚ but her introduction at halftime did give the team a lift.

“We had looked at Thembi in the warm-up but it did not go well for us. At halftime she was feeling better so we put her on‚” Ellis said.

“She went one-on-one with the keeper‚ but I thought the keeper did really well‚ stood up as long as she could. Rhoda [Mulaudzi] also missed two really good chances and missed the target completely.

“The team as a whole fought out there‚ we started playing the way we know we can play. In the second half I thought we gave as good as we gave.”

Ellis says the team showed at the World Cup that they are a better side than their number 49 ranking shows.

“The rankings don’t do us justice‚" she said.

"We have come here and didn’t get the result we should have in the first game [against Spain].

"The second game [against China] was just as tight‚ and the Germans showed us respect in the third by picking what was their best line-up.”