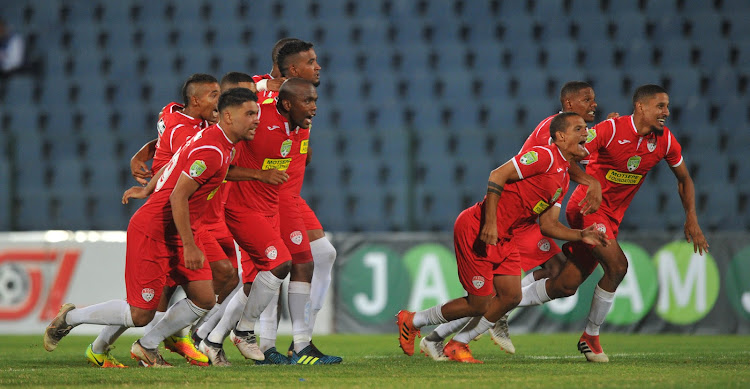 The Magic FC players celebrate after winning on penalties during the Nedbank Cup Last 32 match between Maccabi FC and The Magic FC 29 January 2019 at Dobsonville Stadium.
Image: Sydney Mahlangu/ BackpagePix

Former Bafana Bafana striker George Dearnaley is selling his ABC Motsepe League franchise The Magic‚ disillusioned with the South African third-tier and ready to take a bold new step in his own career.

Dearnaley’s side reached the second round of the Nedbank Cup this year before losing 3-0 to Kaizer Chiefs after extra-time.

It was a performance that drew a lot of plaudits and signalled a potentially bright future for the club‚ but Dearnaley says the lack of financial support in the lower leagues‚ and the shenanigans that happen on and off the pitch‚ means it is time to move on.

“When I bought the club seven years ago‚ the vision was of building a team that could win promotion to the National First Division and ultimately the Premier League‚” Dearnaley told SowetanLIVE.

“We wanted to base the club on the Ajax Cape Town model of developing youth players for the first team and playing a uniform style‚ but the reality is that without money it is very difficult.

“We have finished second in the ABC Motsepe League two years ago and we still have not received our R30‚000 prize-money from SAFA from the previous season.

"The ABC Motsepe League is treated with such disdain by officials‚ before you even start talking about the corrupt practices‚ and terrible and biased officiating.

“All we ever wanted‚ and maybe this is naïve of me‚ was to compete on a level playing field where you are given a fair chance to win games. But that is simply not the case.”

Dearnaley says he has been shocked this season at how games were manipulated‚ directly affecting his team as they remained locked in a league title race with Steenberg United‚ who have since gone on to win promotion to the NFD.

“Everybody knows there are corrupt practices and nothing is done‚" he said.

"We were told that we must do our own investigation and bring evidence before SAFA.

“So what they are saying is we must pay to be in this league‚ pay to run the club and then also pay to investigate and provide evidence to SAFA to clean up the league when that is their job in the first place?

"There is so much effort and expense for so little reward.”

Dearnaley is in the final throes of selling the club’s ABC Motsepe League status‚ but will still be involved in local football.

“We have partnered with Norway Parks‚ which was established in 1934 and has brought through the likes of Shaun Bartlett and current Cape Town City winger Craig Martin‚" he said.

"The team will be called Norway Parks Magic and the sole focus will be developing young players.

“Our coaches‚ including David Kannemeyer‚ will remain involved and work with players in the 13-16 age-group to develop them for the future.”

Part of Dearnaley’s reasons for selling are also to focus on the set-up of academies across the African continent‚ which has already begun.

“We have got a contract to work on an African football project that will see us building academies in Tanzania‚ Rwanda and Botswana.

“It is great to work with good people‚ who have vision and who actually want make a difference in football.”