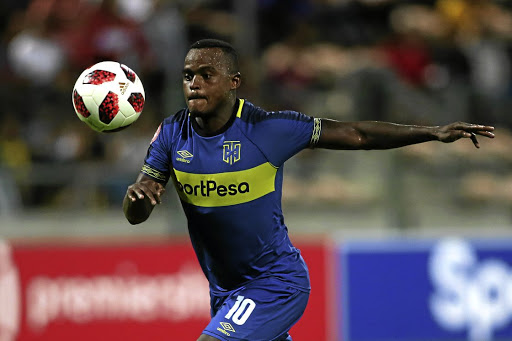 Ayanda Patosi of Cape Town City is likely to return to Asia according to the club./ Shaun Roy/Gallo Images

Patosi, 26, spent the second half of the recent season at Esteghlal from City. The lad from the Mother City scored four goals and made five assists from 17 matches during his stint in the Middle East.

"Patosi will definitely get another club. We are still waiting for concrete offers. He still has two years left from his [City] contract. I hope about four clubs are about to submit offers for him,'' Comitis told Sowetan.

"There is interest from mostly Saudi Arabia. He wants to play overseas, so we are not going to keep him against his wish. I do not see him joining any local club, because the interest for him overseas is big.''

Ayanda Patosi has had his first training session at his new Iranian club‚ as he breaks new frontiers for South African footballers.
Sport
3 years ago

Having cut his teeth in the Belgian first tier with Sporting Lokeren in 2011, it's believed that Patosi is keen to return to this west European country in the impending season.

Comitis also revealed that the club is yet to take a decision on other players who were out on loan in the past campaign. City had loaned out strikers Judas Moseamedi and Allan Kateregga, alongside midfielder Mpho Matsi to Maritzburg United.

"At this stage the decision has not been taken. We will meet with the technical team in the next few weeks. I know that some of our players who were on loan did well, but it will be up to the technical team to say if we retain them or not,'' Comitis explained.

Meanwhile, Maritzburg chairman Farook Kadodia did not hide the club's interest to keep at least one of the City trio.

"The boys [Moseamedi, Kateregga and Matsi] will return to City. After that we will decide what we want, but getting at least one of them would be nice,'' Kadodia said.

Stuart Baxter has yet to name his final Bafana Bafana squad for the 2019 Africa Cup of Nations and that means the door remains open for anyone to ...
Sport
3 years ago

Ayanda Patosi scored one goal and created the other as he enjoyed a sparkling debut for new Iran side Esteghlal.
Sport
3 years ago
Next Article