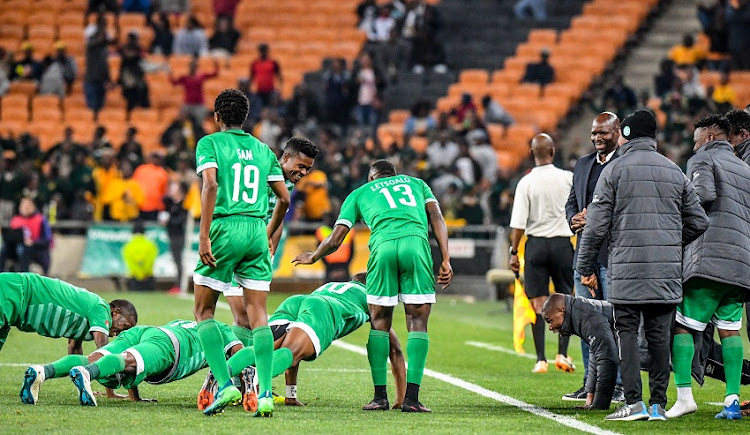 Ndumiso Mabena of Bloemfontein Celtic celebrates with teammates after scoring an equalizer during the Absa Premiership match between Kaizer Chiefs and Bloemfontein Celtic at FNB Stadium on August 29, 2018 in Johannesburg, South Africa.
Image: Sydney Seshibedi/Gallo Images

Bloemfontein Celtic have yet to make any decision on players who could be leaving, as rumours start to spread about who might be on their way out of the cash-strapped Free State side in the coming transfer window.

Club CEO Khumbulani Konco said as it stands, nobody is confirmed to be heading out of the club - even as defender Bongani Sam is heavily linked with Orlando Pirates.

“When the window is open, anything can happen, but it's too early to comment with regards to players. Bongani Sam could go, but he also could be in the green and white next season - who knows?" said Konco.

“It is the same with the others. We cannot talk about that now. We will have to see what happens.”

Sam, a graduate of the Nedbank Ke Yona Team Search, had an excellent first campaign in the Absa Premiership and was nominated for Young Player of the Season. He was rewarded with a call-up to the national under-23 side that competed at the Cosafa Cup in Durban, but lasted just seven minutes of his debut before picking up a grade 2 tear in his hamstring.

Celtic players will be back in training on June 18. They will start pre-season in Bloemfontein before heading up to Johannesburg to play friendlies against teams that have not yet been finalised.

Konco confirmed that co-coaches Lehlohonolo Seema and John Maduka will remain in charge, adding that the side are not looking to replace them with a more experienced head coach any time soon.

The pair led the team to eighth in the Absa Premiership last season after taking over from Steve Komphela in January - a remarkable achievement given that the cash-strapped club endured player strikes and fan violence over their protracted sale, which appears to be off the table for now.

Owner Max Tshabalala has done an about-turn and now appears determined to hold on to the team - unless he is made an offer that he can't refuse.

Celtic had to play their final two home games of last season away from Bloemfontein after fans caused the match against Cape Town City on April 14 to be abandoned, protesting against what they perceived as Tshabalala’s efforts to stall the sale of the team to local buyers.