Banyana still in with a chance - Dlamini 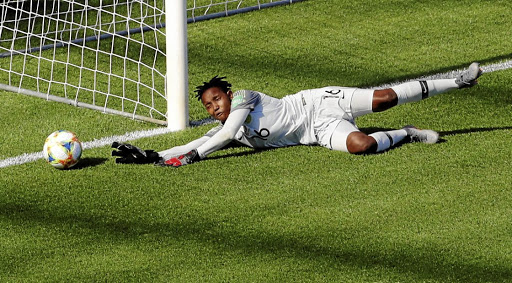 Banyana Banyana goalkeeper Andile Dlamini pulled off great saves in the 3-1 loss to Spain on Saturday. They face China next on Thursday and Germany on June 17.
Image: Bernadett Szabo/REUTERS

Banyana Banyana goalkeeper Andile Dlamini remains optimistic they can still progress to the knockout phase of the World Cup in France, despite losing the opener 3-1 to Spain on Saturday.

"We can still go through to the knockout stage of the competition. The belief and confidence is there. We just need to win at least one of our remaining two group games," said Dlamini, who pulled numerous great saves against Spain.

The defeat left World Cup debutants Banyana bottom of Group B. SA next face China at Parc des Princes on Thursday (9pm). They will wrap up their pool campaign against Germany on June 17.

"It's our first World Cup, but that did not show against Spain. We really held our own.

"If we can continue playing like we did against Spain, we have a good chance of getting positive results in the next matches," Dlamini asserted.

"We must show the world that we are not here to just add numbers. The game against Spain was an eye opener and it will help us going forward because we learnt a lot form it."

"My defenders were on top of their game. They protected me very well. Although I made some saves, most of the time they thwarted the danger," said Dlamini, the Mamelodi Sundowns Ladies goalie.

If it wasn't for video assistant referee (VAR) decisions, it'd be completely suitable to say Banyana Banyana punched above their weight in the 3-1 ...
Sport
2 years ago

Janine van Wyk says Banyana Banyana must put their Spain defeat behind them and look forward to their clash with China on Thursday as they seek to ...
Sport
2 years ago

The way Banyana Banyana lost 3-1 to Spain in their first ever Fifa Women's World Cup is a bitter pill to swallow, considering a couple of factors.
Sport
2 years ago
Next Article