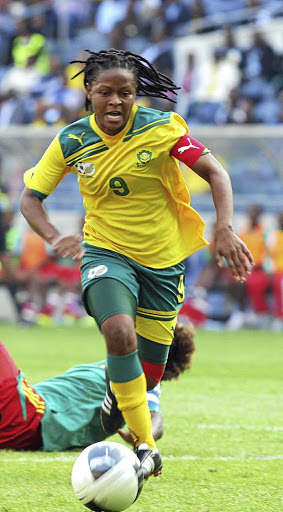 The way Banyana Banyana lost 3-1 to Spain in their first ever Fifa Women's World Cup is a bitter pill to swallow, considering a couple of factors.

First, Banyana were 1-0 up in the first half until the 69th minute through Thembi Kgatlana's strike at Stade Oceane in Le Harve, when central defender Janine van Wyk was adjudged to have handled the ball in the box and a penalty was awarded to the Europeans.

Left-back Nothando Vilakazi cleared the ball, but her leg was left hanging and the opponent fell forward, appearing as if Vilakazi fouled her. On review, through the Video Assistant Referee (VAR), the referee pointed to the spot and the turnaround was complete, leaving many South Africans heartbroken, including former captain of the team Amanda Dlamini, who played 105 times for the national team.

Dlamini was disappointed, but sounded positive.

"I felt we gave a very good first half," said Dlamini, who was in Tanzania for the Castle Africa Fives tournament, which was won by Nigeria (men), who beat SA in the final and Uganda (women).

"I think our tactics were to play on the counter and our three fastest attacking players Thembi, Ode [Fulutidulu] and Amanda Mthandi would normally do well on the break," Dlamini continued.

"But you need numbers [up front] when you get a break. You might get a chance on a solo run, but most of the Spain players got back in time and had the numbers behind the ball. So it was a bit difficult [for Banyana]."

Banyana are up against another tough opponent, China, in Paris on Thursday.

It's a tough task ahead, but Dlamini can only hope that Banyana can repeat the first-half showing against Spain and sustain it for 90 minutes when they meet the Chinese.

"I think we gave a great, great first half, but we just succumbed to VAR in the second half," she said, pointing out that the Vilakazi decision was "fair" considering the studs up from the defender was a "bit reckless", even though she got the ball first.

"In the next game, it's going to be difficult. I got a glimpse of the match between Germany and China [Banyana's other group opponents]. Even though China lost 1-0, they were the superior ones."

If it wasn't for video assistant referee (VAR) decisions, it'd be completely suitable to say Banyana Banyana punched above their weight in the 3-1 ...
Sport
2 years ago

Desiree Ellis has urged her Banyana Banyana side to stay focused and stick to the gameplan ahead of Saturday’s Fifa Women’s World Cup opener against ...
Sport
2 years ago

Our cheat sheet on supporting Banyana Banyana at the 2019 FIFA Women's World Cup.
S Mag
2 years ago
Next Article