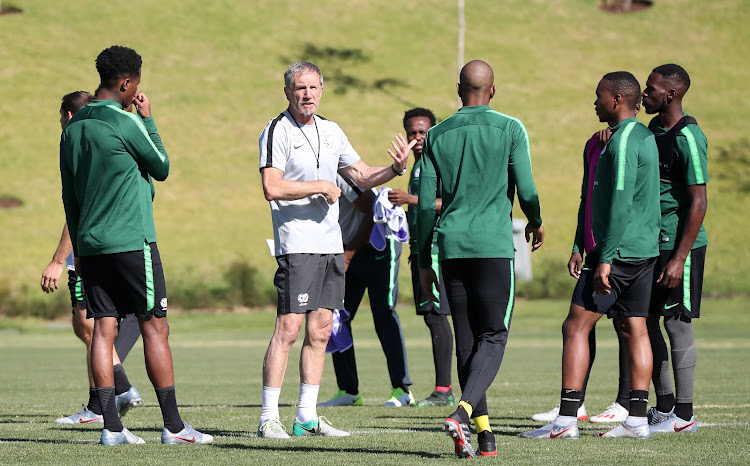 Bafana Bafana head coach Stuart Baxter says South Africa's strength at the Africa Cup of Nations in Egypt will be the "togetherness" of the team.
Image: Muzi Ntombela/BackpagePix

Bafana Bafana coach Stuart Baxter is pleased that his team are showing a togetherness and passion for representing the nation‚ which he said can be a strength for South Africa at the 2019 Africa Cup of Nations (Afcon) in Egypt.

Baxter on Sunday cut three players - Kermit Erasmus‚ Ben Motshwari and Fortune Makaringe - from a 26-man preliminary squad announcing his final 23-man roster who will depart Johannesburg on Monday night for a second leg of their Egypt 2019 preparation camp in Dubai.

The coach said complications such as the withdrawal through injury of Montpellier winger Keagan Dolly and Mamelodi Sundowns centreback Rivaldo Coetzee‚ due to his mother being critically ill‚ had made the selection process more difficult.

"This has not been an easy process.

"It's certainly not made easier when we've had issues within the camp‚" Baxter said.

"We had the early injury to Keagan Dolly‚ which was a blow.

"Then Rivaldo called on the day of the assembly and told us of his mother's very serious illness‚ and after that we haven't heard anything from him.

"And over the last few days we've had one player - we won't mention a name - who's been under enormous pressure from his family to attend a ceremony‚ which he has finally decided he won't attend.

"And from no disrespect to his family‚ but out of his passion for the national team - and we're very pleased with that."

Baxter said that such passion displayed by the unnamed player‚ and a spirit of togetherness that has begun to be bonded on the team's first leg of their pre-Afcon preparations in camp training at Steyn City School in Midrand this past week‚ can be a strength for South Africa.

"We've tried to put together a balanced squad that gives us options tactically.

"'It's been very difficult to achieve that balance.

"We lost a centreback‚ and we've only probably in the last few days realised that we were not going to get him into the squad.

"And then you have the question‚ do you replace a centreback‚ or do you keep a centreback from within the squad?

"Both of whom had small injuries [on Saturday].

"Now most of the centrebacks [outside the Bafana squad] have not been doing anything for the last few weeks.

"So do you now take one from the Cosafa Cup? We decided that we would solve this in-house.

"To achieve that balance has been very difficult. When we thought we were going to lose one of our players to a cultural issue‚ we made that decision‚ 'No‚ we can cover it from within the squad'.

"And probably that the players feel a little bit underdogs and we can create a bit of a siege mentality.'"

Against Group D heavyweights such as Ivory Coast‚ who SA kick their tournament off against in Cairo on June 24‚ and Morocco‚ both of whom possess more players at big-name European clubs than Bafana‚ such togetherness from the mostly Premier Soccer League-based SA can be crucial.

Bafana play a friendly warm-up against Ghana in Dubai on Friday‚ then another against Angola in Cairo on Wednesday‚ June 19.