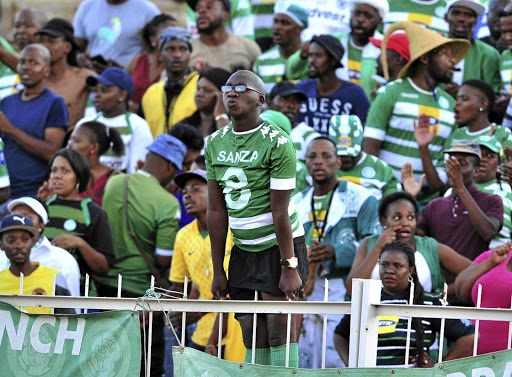 Bloemfontein Celtic fans might soon find themselves in the cold as the club is on the verge of being sold.
Image: Samuel Shivambu /BackpagePix

The future of professional football in the Free State hangs in the balance. This is as a result of the relegation of Free State Stars from the Absa Premiership and the financial distress facing Bloemfontein Celtic.

Free State has a proud football heritage and has produced some of the country's best legends in soccer.

The province is also home of Siwelele, arguably the most famous and passionate fan base in the PSL. The future of professional football in the province is uncertain now with Stars relegated to the NFD and Celtic apparently being sold to Ajax Cape Town.

Legendary striker Fees Moloi admitted that he is concerned with the state of football in the province.

"To be honest, I am very worried about the current situation that we are seeing in the province, these are difficult times," said Moloi, who turned out for both Stars and Celtic in his sterling career.

"I think football has slowly been declining and it's beginning to show. We need more knowledgeable people in these clubs who know football."

The 46-year-old said the consequences of Ea Lla Koto's relegation will soon be felt.

"This effects of the relegation will be very bad because many of the players will be released and will be unemployed.

In retaining their Absa Premiership status, Maritzburg United have ensured that they will keep their slice of the lucrative top league pie.
Sport
3 years ago

"Businesses will suffer because people will no longer go to stadium and children will not have that motivation to play football."

The province currently has some of the shining stars in local football including Vincent Pule, Teboho Mokoena (PSL Young Player of the Season), Sipho Mbule and Thembinkosi Lorch (PSL Footballer of the Season). Moloi, a former teacher and now development coach, said Stars and Celtic rejected many of these stars.

"I knew Lorch from Maluti FC and I took him personally to Stars but they were not interested in signing him."

"Pule ... I also knew him from African Warriors and I recommended him to Wits. So it's clear that our local clubs do not have proper scouting structures in place. Teboho's mother took him for trials at the club and [development coach] Themba Sithole said he was not good enough."