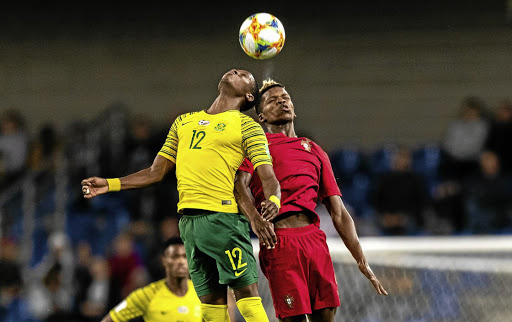 James Monyane of SA U20 and Florentino Luis of Portugal go for a header in Poland.
Image: Boris Streubel/Getty Images

In the wake of Amajita's failure to progress to the knockout phase of the ongoing Under-20 World Cup in Poland, many have questioned coach Thabo Senong's credentials.

It was the second consecutive U-20 World Cup that SA failed to reach the knockout stages with Senong at the helm as they also bombed out in South Korea in 2017.

Nevertheless, ex-Amajita coach Serame Letsoaka has defended Senong, citing deficiency in mental strength on the players' side as a factor for their latest failure.

"The mentality of our players is the biggest problem. Our players are too much in a comfort zone . it's not Thabo who must be blamed," Letsoaka told Sowetan from Botswana, where he's the technical director of the country's football association, yesterday.

"In the first game against Argentina [5-2 defeat], when we started to dominate we quickly went into our comfort zone. A coach cannot teach the mental toughness, it must be instilled at a young age."

Letsoaka, 55, remains the only coach to have guided an SA national side, across all levels, to the World Cup quarterfinals. He achieved this rare feat with Amajita at the 2009 U-20 World Cup in Egypt.

It was a 2-1 defeat at the hands of Ghana in the last 16 that eventually saw SA exit the global showpiece.

"Our players at that time [2009] had that mental strength that we lack today. The guys such as Thulani Hlatshwayo, Thulani Serero and Ramahlwe Mphahlele all have the right mind-set even today," Letsoaka explained.

While he confirmed he'll definitely leave when his contract expires, Letsoaka took pride in the Zebras' win over SA in the Cosafa Cup quarterfinal on Sunday.

"We are still building the team, but beating Bafana shows we are on a right track. As the technical director, I am very proud of the team. But I will leave at the end of my contract," said Letsoaka.

"It's a three-year deal, today marks a year since I came here. I have two full years left. They want me to stay, but I won't."