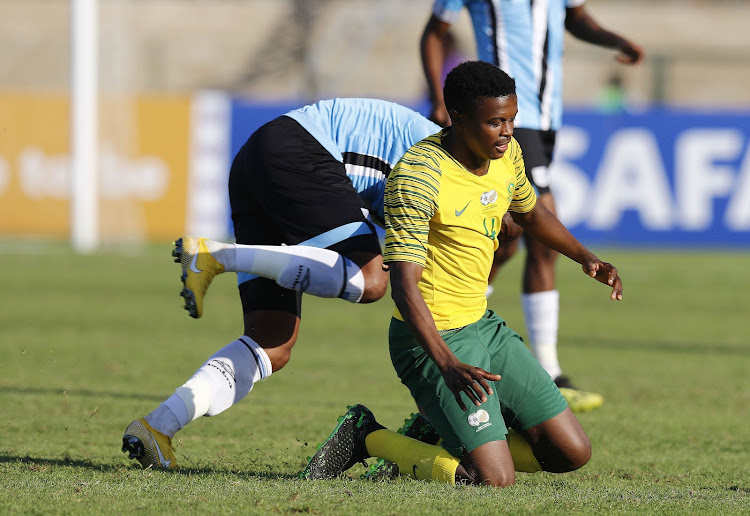 SuperSport United exciting midfielder Teboho Mokoena had a sterling game before his miss in the penalty shootout as Botswana knocked South Africa out of the Cosafa Cup on June 2 2019.
Image: Anesh Debiky/Gallo Images

Teboho Mokoena missed a penalty in the shoot-out as South Africa let a late lead slip to bow out of the Cosafa Cup with a 5-4 penalty shoot-out loss to Botswana after the teams had played to a 2-2 draw in their quarterfinal at the Princess Magogo Stadium on Sunday.

South Africa led deep into injury-time, but conceded a second goal from a corner to force the game to penalties, where the unfortunate Mokoena, who had been otherwise excellent in the game, saw his effort saved.

Luther Singh and Grant Margeman had the home side cruising the first half, but the inexperience from the largely Under-23 selection showed as they let Botswana back into contentention to repeat their 2015 exit on penalties to the same opposition.

South Africa will now take on Uganda in the Plate semifinals at the same venue on Tuesday, while The Zebras advance to a Cup semifinal against Lesotho at the Moses Mabhida Stadium a day later.

Kaizer Chiefs right-back Reeve Frosler got a run, while the defence was led by captain Tercious Malepe, who spent this past season at Chippa United.

The only ‘over-age’ player used was goalkeeper Reyaard Pieterse, who lifted this trophy in 2016.

South Africa’s first real opportunity came after 15 minutes when Singh’s inviting corner was headed wide by Katlego Mohamme when he really should have hit the target at least.

They were ahead on 19 minutes though when Singh sprang the offside trap from Mokoena’s superb pass and kept his cool to slot past Botswana goalkeeper Ezekiel Morake.

Singh then flashed a free-kick over the bar from 35-yards, before some neat work on the edge of the box from Kamohelo Mahlatsi created the scoring chance for Margeman, the Ajax Cape Town midfielder drilling the ball into the back of the net.

Singh delayed his shot too much soon afterwards and saw his effort blocked as South Africa were suddenly rampant.

Botswana finally had an effort on goal when former Bloemfontein Celtic winger Joel Mogorosi got his head to a free-kick, but Pieterse did well to beat the ball away, and minutes later saved from Thero Setsile after the Zebras midfielder had raced clear unopposed into the box.

TS Galaxy’s Nedbank Cup hero Zakhele Lepasa replaced Jordan early in the second period, but it was Botswana who had the greater purpose in their play.

Lebogang Ditsele headed the ball home from a corner to halve the deficit on the hour-mark, a soft goal for the home side to concede, and their frailties from set-pieces showed again when Botswana equalised with literally the last piece of action in the 90 minutes as Thatayaone Ditlhokwe glanced the ball into the net.

With no extra-time the match went straight to penalties and it was Botswana who held their nerve to advance.