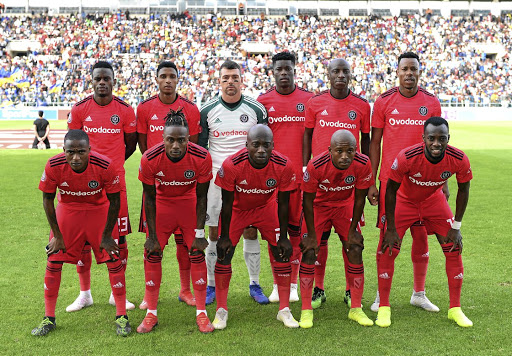 Orlando Pirates players will assemble for the new season on July 16, starting with the medicals. Coach Milutin Sredojevic has backed them to reach the 60-point mark in the new campaign to win the title. / Thinus Maritz/Gallo Images

Orlando Pirates coach Milutin Sredojevic is targeting to reach the 60-point mark in the new campaign, hoping it'll be enough to finally clinch the league title.

Having been pipped to the title by Mamelodi Sundowns for the past two seasons, all eyes and pressure are on Sredojevic and his charges in the new campaign.

The Serb is determined to eventually lead Bucs to the championship. "We had 55 points in my first season [the 2017/2018] and 57 in the past season. Now we want to cross over to 60 points.

"Whether this will be enough to win the championship we shall see, but I trust it can see us win it. We shall do anything possible that this league comes to us,'' said the former Uganda national coach.

The Bucs tactician found himself at the receiving end of mild criticism for not declaring he wanted to win the league in the just-ended season. He always downplayed their chances and is still resolute in his low-key approach.

"Nobody has spoken now and won the league in May. You need to work for things to happen. It is our work that shall speak for us. To say I want to win the league is unfair,'' Sredojevic noted.

"We are convinced, if we continue improving we shall have a season that will bring us something to be proud of. But threatening someone is not our style of doing things.''

Meanwhile "Micho", as the Sea Robbers mentor is fondly known, was over the moon to see one of his top-performers, midfielder Ben Motshwari, being included in the Bafana Bafana Africa Cup of Nations provisional squad.

"Extremely proud and happy. Ben Motshwari, if he was not injured for our Telkom Cup, if he wasn't injured in November and [was] there in February, March, we would have had him fully throughout the season. He would have given us more,'' Micho said.

Pirates assemble for the new season on July 16, starting with medicals. In what will be their first pre-season match, Bucs face their old Soweto foes, Kaizer Chiefs, in the Carling Black Label Cup at FNB Stadium on July 27.

'Nearly-men' Pirates lost title due to a lack of conviction

Orlando Pirates' rapidly growing reputation as the Premier Soccer League's "nearly-men" can't have been helped by yet another capitulation in the ...
Opinion
2 years ago

Orlando Pirates coach Milutin Sredojevic has a strong belief that finishing as runners-up for two seasons in a row has laid a solid foundation for ...
Sport
2 years ago
Next Article