Bartlett warms up to 'second assistant' 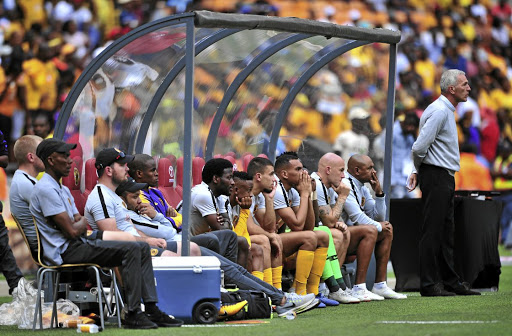 Kaizer Chiefs coach Ernst Middendorp had many sad days at the office this past season.
Image: Samuel Shivambu/BackpagePix

Kaizer Chiefs' second in command Shaun Bartlett would welcome the addition of a second assistant coach at the club.

Middendorp and Bartlett have been in charge of the club since December, taking over from Giovanni Solinas and Patrick Mabedi.

The former Bafana Bafana striker says the process is underway for the addition of another deputy.

"Probably that will happen but it will be decided by the management.

"It is something that has been put forward as far as I know," Bartlett said.

Amakhosi are far behind their rivals Orlando Pirates and Mamelodi Sundowns regarding the brains capacity of their technical teams.

Shaun Bartlett has had no communication from Kaizer Chiefs on his contract being cut short and is taking that as an indication‚ for now‚ that the ...
Sport
2 years ago

Bartlett concedes that in the modern game, a strong backroom staff was necessary for success.

"The management is looking at the particular need and how we can improve it [technical team]. Even Pitso said it when he thanked the 14 people around him. But we don't want 14 people, we just want people in the right positions to assist."

The former Chiefs striker, who played under Middendorp in his first stint around 2006, has thrown his weight behind the German mentor.

"Nobody realises the amount of work the man puts in. Waking up at 2am and sending emails at 4am. That's what the man is about," he said.

"That's why I enjoy working with him because everything is done in detail."

The former AmaTuks coach also gave an injury update, stating that Itumeleng Khune and Happy Mashiane should be back for the
pre-season.

"Some of them are long-term injuries like Nkosingiphile Ngcobo, who has an Achilles injury, but the likes of Khune and Mashiane will be with a conditioning trainer so that they are in decent shape when we come back for the pre-season."