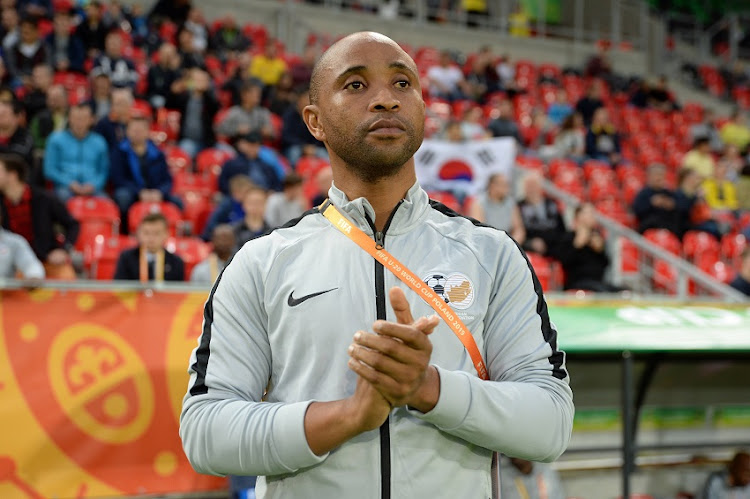 Thabo Senong, head coach of South Africa looks on during the 2019 FIFA U-20 World Cup group F match between South Africa and Korea Republic at Tychy Stadium on May 28, 2019 in Tychy, Poland.
Image: Aitor Alcalde - FIFA/FIFA via Getty Images

Coach Thabo Senong rued missed first half chances as South Africa slumped to a 1-0 defeat to South Korea in their second match at the 2019 FIFA Under-20 World Cup on Tuesday.

The result leaves Amajita facing a first round exit‚ and followed a 5-2 defeat to Argentina in their pool opener.

They now face Portugal on Friday‚ where even an unlikely victory would not assure them of a place in the next stage.

“It was a very tough match‚ tough luck to our boys. We had a very good first half‚ the only thing was that we did not convert our chances‚” Senong said.

“I told the boys at halftime‚ concentrate and remain solid‚ keep the discipline and convert your chances‚ otherwise we are going to get punished.

“Korea had one set-play‚ second phase and we lost a goal. After that they closed their defence‚ they defended in numbers and that is the name of the game‚ you don’t take your chances you get punished.”

Senong concedes they have no option but to go for the win against Portugal‚ who lost to Argentina on Tuesday.

“We are looking forward to the last game in our group against Portugal.

"We have to plan better‚ it is also important to work hard and approach the game professionally with the aim of taking three points. But it won’t be easy.”

Amajita’s fate is now out of their hands‚ but Senong says if they are to exit the competition‚ they want to go out with their heads held high.

“Obviously now we have dropped points‚ we are bottom of the group‚ but we are developing these players. Every game we must approach professionally with the aim of winning‚” he said.

“We approached the first two games with the aim of winning‚ but we were up against very strong opponents. Korea were very physical and tactically disciplined.

“We don’t want to count on what [else] is happening in the group‚ we must just focus on Portugal and putting in a better performance.”