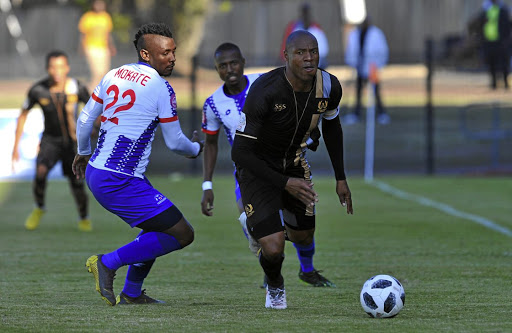 Maritzburg United are on the verge of a PSL comeback as they are in a commanding position in the promotion/relegation playoffs.

The Team of Choice will visit fellow KwaZulu-Natal side Royal Eagles at Chatsworth Stadium this afternoon (3pm), with maximum points enough to see Maritzburg save their PSL status.

Eric Tinkler's men top the log with six points from their two outings, while Eagles are second with three points from three matches.

The bottom side is Tshakhuma Tsha Madzivhandila (TTM) from Limpopo with three points. Like Eagles, they've also played three matches.

If Maritzburg deliver the goods against Eagles, their home clash against TTM on Saturday will be a dead rubber.

Tinkler, however, is not getting all too excited and wants the job done before popping the champagne.

"In life there are no guarantees, hence it's still important for us to look to collect the three points against Eagles," Tinkler told his club's website ahead of the clash.

"We want to collect the three points in order to guarantee our survival. It's going to be a very tough game, they are a team that will have absolutely nothing to lose and everything to gain," Tinkler added.

It's all to play for in this match in terms of the money, because there's a big difference between a PSL and NFD team. In the PSL, clubs get R30m each per season in grants, while those in the second tier receive R4.8m in the same period.

Maritzburg can count on the likes of Judas Moseamedi and Thabiso Kutumela for goals, while Eagles' Levy Mashiane would be buoyed by his goal in their 2-1 defeat to TTM on Saturday.

Royal Eagles coach Sazi Ngubane has demanded a much-improved performance from his players in the next match as they look to keep their promotion ...
Sport
2 years ago
Next Article