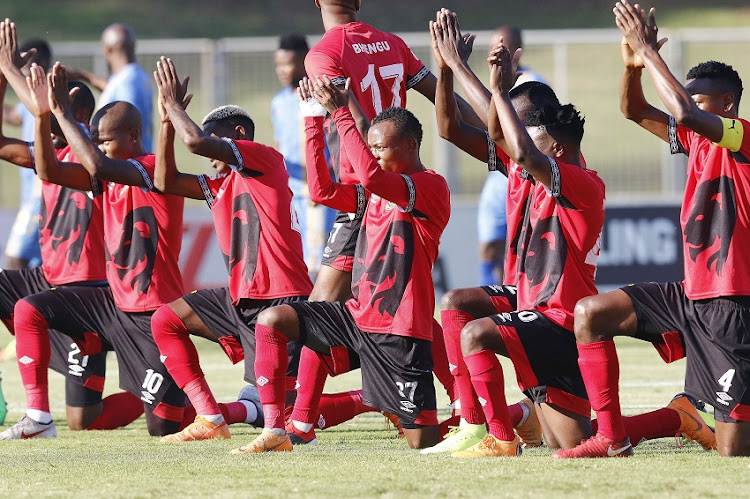 Maritzburg United are one point away from retaining their place in Premier Soccer League after Tshakhuma Tsha Madzivhandila gave them a huge advantage by beating Royal Eagles 2-1 in the fourth round of the PSL promotion play-offs at the Thohoyandou Stadium on Saturday.

Tshakhuma, who are better known as TTM, went 2-0 up inside the four minutes via well-taken goals by Wonderboy Makhubu and Ndabayithethwa Ndlondlo in the 3rd and 4th minute as they caught their Durban visitors cold under the hot Limpopo sun.

Eagles pulled one back through Levy Mashiane in the 2nd minute of the second stanza while a late rally to find an equaliser and the winner proved to be a tall order for Sazi Ngubane’s side.

TTM’s victory may have come a little too late to help them gain promotion, with two defeats in their opening matches having tainted their ambitions.

The Limpopo side’s win puts top-placed Maritzburg in the driving seat as they’ve collected six points from their opening two matches. A point for Eric Tinkler’s side in the clash against Eagles at the Chatsworth Stadium on Wednesday will see Maritzburg keeping their place in the PSL after finishing 15th in the recently concluded season.

Both TTM and Eagles can now only attain six points as they are left with one match to finish their campaign in the play-offs.

With two matches to play, Maritzburg can still afford to lose against Eagles on Wednesday and only finish the job in front of their home fans at the Harry Gwala Stadium against TTM on Sunday.

In yesterday’s match, Eagles failed to take the half chances they created in the opening half, with the home side dominating possession as they fought for more goals that could be crucial if all the teams were to finish on six points - a scenario only likely if Maritzburg lose their remaining two matches.

Mashiane could have given Eagles the equaliser in the 75th when he got possession of the ball with no one closing him inside TTM’s area but poor first touch let him down.

With their first victory, TTM will now rely on Eagles to keep them in the race for promotion even though they will rue the goal they conceded at home yesterday as it left them bottom and minus two on goal difference.