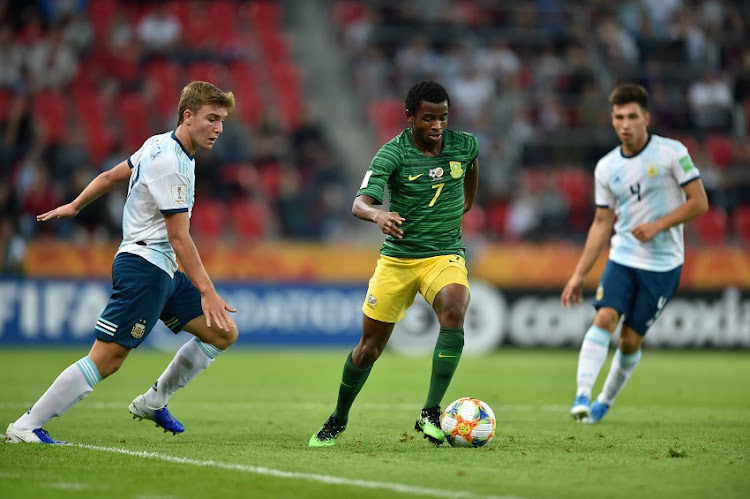 Promise Mkhuma of South Africa is challenged by Pedro De La Vega of Argentina during the 2019 FIFA U-20 World Cup group F match between Argentina and South Africa at Tychy Stadium on May 25, 2019 in Tychy, Poland.
Image: Aitor Alcalde - FIFA/FIFA via Getty Images

Ten-man South Africa held their own in patches, but ultimately were muscled out of their opening Fifa Under-20 World Cup game 5-2 by Argentina in a thriller at Stadion Miejski in Tychy, Poland on Saturday night.

All is not lost for Amajita. The top two teams and four best third-placed finishers progress to the last-16.

Considering the manner in which it started, the first half could not have gone much better for SA.

A goal from Fausto Vera, powering a header from Cristian Ferreira's corner, put Amajita firmly on the back foot.

The Argentineans stroked the ball around precisely, closed the spaces, and kept the South Africans pinned back early.

A classy equaliser by Keenan Phillips got SA back into the game. The Bidvest Wits right-back got up excellently to Promise Mkhuma's free-kick from the right touchline to glance a header past advancing goalkeeper Manuel Roffo.

After scoring the South Africans grew a few inches, often having Argentina stretched with skilfull buildups.

Argentina came out of the break notably stepping up the tempo.

On the hour a first VAR decision went against SA as centreback Givemore Khupe was adjudged to have fouled Ferreira. Esequiel Barco slotted the 63rd-minute penalty.

A second VAR ruling was far less marginal, after Phillips rashly hacked at Facundo Medina and was red-carded in the 66th.

The South Americans produced a sublime third, as Julian Alvarez chipped to Barco free on the left, who volleyed past Khubeka from an improbable angle in the 71st.

Substitute Adolf Gaich beat Khupe on the left and squared for Alvarez to easily sweep in a fourth in the 78th.

Medina muscled SA replacement Leo Thethani off the ball as the referee pointed to the spot. Lyle Foster buried to the right of Roffo to pull one back in the 85th.

Gaich swept in a fifth for Argentina from a corner in the 92nd.