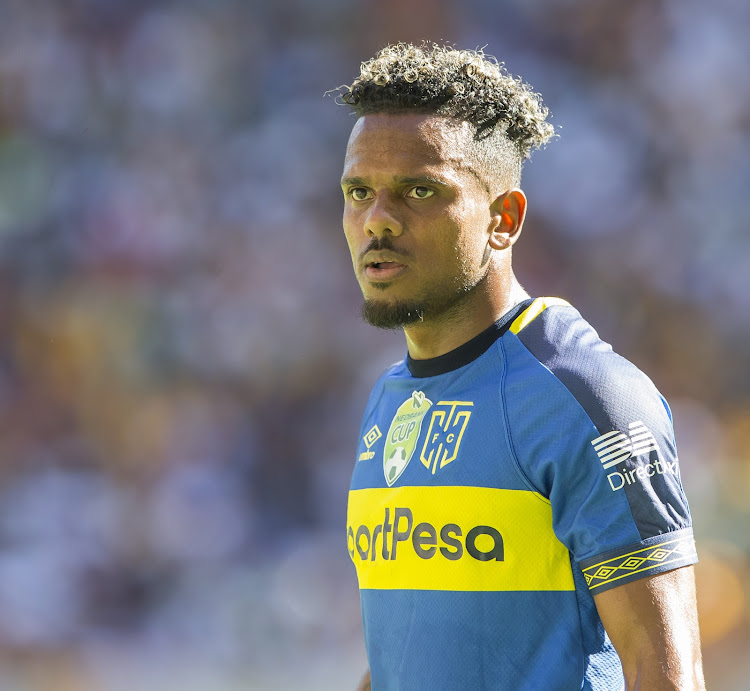 Cape Town City striker Kermit Romeo has in the past made headlines for the wrong reasons when it comes to national team selection or the lack of.
Image: Dirk Kotze/Gallo Images

Any player who wants to tell Stuart Baxter that they are “not a bench player” will be quickly given their marching orders from the national team‚ the Bafana Bafana coach has said.

Baxter will run the rule over Erasmus in the training camp and said he expects no problems from the often volatile City striker.

“If any of the squad that we’ve picked want to tell the leadership of the national team that they’re not bench players then they’ll be quickly removed from the list‚” Baxter warned.

“I don’t think that in a sensible moment Kermit would make that sort of comment.

“Rather than listen to players in their disappointment‚ I would rather select them for the squad and‚ in a calm moment‚ have a discussion about‚ ‘I can’t guarantee you a place’.

“And about‚ [City coach] Benni McCarthy has been able to guarantee Kermit a place and put his arm round him and make him feel some love.

“If it’s only playing that’s the criteria‚ then you can’t attach yourself to a national team.

“The same way as [Karim] Benzema could not be guaranteed a place in the French [World Cup-winning team] I can’t guarantee Kermit a place in our team.”

Former SuperSport United and Orlando Pirates striker Erasmus has come into national contention since his transfer to City‚ and subsequent flashes of form‚ which followed a stint barely playing in Europe.

Erasmus‚ once on the books of Feyenoord Rotterdam as a young player‚ left Pirates for Europe again to join Rennes in France’s Ligue 1 in January 2016.

In just under two years in France he played a handful of games for Rennes’s first team‚ their reserves‚ and was loaned without much more success to Lens in Ligue 2‚ before ending up in a brief stint at Swedish second-tier team AFC Eskilstuna.

He has scored three goals in 13 Premier League appearances since joining City in December.

Bafana’s first game at the Afcon finals‚ which runs from June 21 to July 19‚ is on June 24 in Cairo against Ivory Coast.