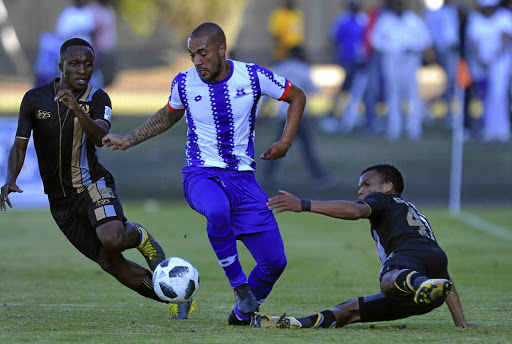 Miguel Timm of Maritzburg United is sandwiched by challenged by Royal Eagles markers as Maritzburg went on to win their first play-offs game 1-0. / Sydney Mahlangu/ BackpagePix

Maritzburg United coach Eric Tinkler has urged his team not to wait until the final match to win the PSL play-offs.

The Team of Choice are in the driver's seat in the promotion/relegation play-offs after they got off to a winning start.

The home side clinched a 1-0 win over fellow KZN club Royal Eagles courtesy of a Thabiso Kutumela strike at the Harry Gwala Stadium on Sunday.

"We are treating this as a cup competition, so we are treating the next match like it's a semifinal and then against Royal Eagles is the final. And if we win then we are safe and the last game won't matter," Tinkler said.

"The carrot I have dangled in front of the players is the fact that we can finish the job in the first three games and the fourth will not matter."

Maritzburg United coach Eric Tinkler has warned his troops against underestimating their National First Division (NFD) opponents in the promotion ...
Sport
3 years ago

That "semifinal" the former SuperSport United boss speaks of is against Tshakhuma Tsha Madzivhandila at the Thohoyandou Stadium in Venda tomorrow (3pm).

The former Bafana Bafana midfielder expects an improved performance from his players in Limpopo.

"I am very happy with the result. I am happy we are in the play-offs because it gives us a chance. Now we have three points in the bag ahead of the game against TTM."

Maritzburg find themselves in this position after their form took a massive dip in contrast with the prior season where they were among the best performers in the entire Absa Premiership.

Tinkler came in earlier in the year to rescue the situation after Muhsin Ertugral was fired.

"The job has been more difficult on the psychological side. I haven't made massive changes on the football side.

"We have been working on the psychology of the players so that they are more positive."