Pitso Mosimane wants to put his efforts on youth football 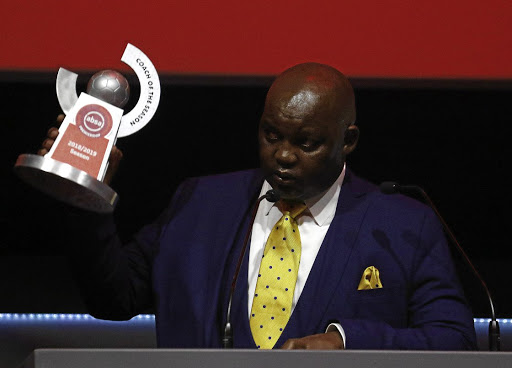 It's not going to happen anytime soon, but Mamelodi Sundowns coach Pitso Mosimane has revealed that his burning desire is to produce complete footballers capable of representing the nation on the world stage.

Mosimane, 54, has an impressive CV in the PSL, with league titles and domestic cup competitions to his name.

On the international stage, he has also coached Bafana Bafana and won the CAF Champions League with the Brazilians. So what could be next for him?

Mosimane, who has won the PSL Coach of the Season award for the second season running, has hinted he may some day quit club football and run a youth football academy.

"I would like to do youth football and to understand it more," revealed Mosimane, while speaking at Durban's International Convention Centre at the PSL awards at the weekend.

Pitso Mosimane dedicates his award to his Mamelodi Sundowns players

Pitso Mosimane has dedicated his Coach of the Season award to his Mamelodi Sundowns players after winning the top prize for the second year in a row ...
Sport
3 years ago

It concerns him that SA has not been able to produce world-class players who could play for the big teams overseas and help Bafana Bafana get through the group stage at the Fifa World Cup.

"There's one common thing that I find; they have bad habits and one of the issues is putting the ball in the net. We miss a lot guys - let's be honest," he said.

"We play teams that don't outplay us, but they beat us - one chance, one goal.

"I know what the player of tomorrow lacks. I've seen (Thembinkosi) Lorch, I've seen Themba Zwane, Percy Tau, Katlego Mphela. it's not a finished product and it can be better," said Mosimane.

Mamelodi Sundowns coach Pitso Mosimane was happy to see club veteran Hlompho Kekana finally win something at the weekend after watching the ...
Sport
3 years ago

"I want to build a player for the World Cup. I want Bafana in the World Cup and not just to go there and come out of the group, but progress (to the next stage)... So that's my next chapter," he said.

"We have to fight - our jobs are on the line. We are competing with people who come from the school of football - Europe," he said.