I am proud I achieved it all - Nomvethe 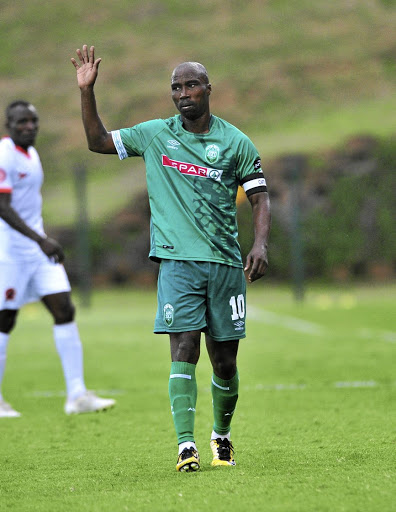 Siyabonga Nomvethe of AmaZulu has announced his retirement from football at the age of 41.
Image: Samuel Shivambu/BackpagePix

Siyabonga Nomvethe recalled the time he had to hide in his room at home in KwaMashu to get away from Orlando Pirates club officials who were trying to sign him.

"I had to run away from Pirates people who came to my house to try to sign me. They saw me go into the house but my family insisted that I was not there," Nomvethe laughed as he reflected that time some 20 years ago.

The year was 1998 and Nomvethe was the most sort-after striker in local football.

Pirates had already signed his teammates from African Wanderers, Sibusiso Zuma and Phumlani Mkhize, and the only signature remaining was that of Nomvethe, to complete the triumvirate.

But Bhele, as he's affectionately known, wanted to carve his own path and opted to join rivals Kaizer Chiefs instead.

The rest is history - as he went on to enjoy a sparkling career that recently ended when he hung up his boots.

"I feel privileged to have had a career where I achieved everything I wanted to achieve.

"I played for the biggest clubs in the country, played overseas and for Bafana Bafana. I managed to play until the age of 41, so I have been blessed in my career," he said.

Having drawn the curtain on his career, Nomvethe could easily make a career switch to athletics.

Jabu Maluleke has his sights set on bettering Siyabonga Nomvethe’ achievement of playing past the age of 40 as he ruled out any thoughts of ...
Sport
3 years ago

This is a man who is well-respected for his professionalism as a footballer and still wakes up every morning to do some road running to keep in shape.

"My usual routine is to wake up at 5am and hit the road. I made sure that my body was well conditioned. I usually run from Moses Mabhida Stadium to uMhlanga or KwaMashu," he explained.

"I've never taken alcohol or smoked in my life. I just enjoy watching TV, sport and spending time with my family."

The former Udinese goal-poacher insists that he could have easily continued playing for a few more seasons.

"It's not like I am tired or anything. I wanted to make way for youngsters to play because I ran my race."

He is expected to take up a role in the AmaZulu structures but the details will be ironed out within weeks.

"At the moment I can't yet say what the plan is. I am still waiting for the club to tell me, but I will definitely still be part of the AmaZulu family."