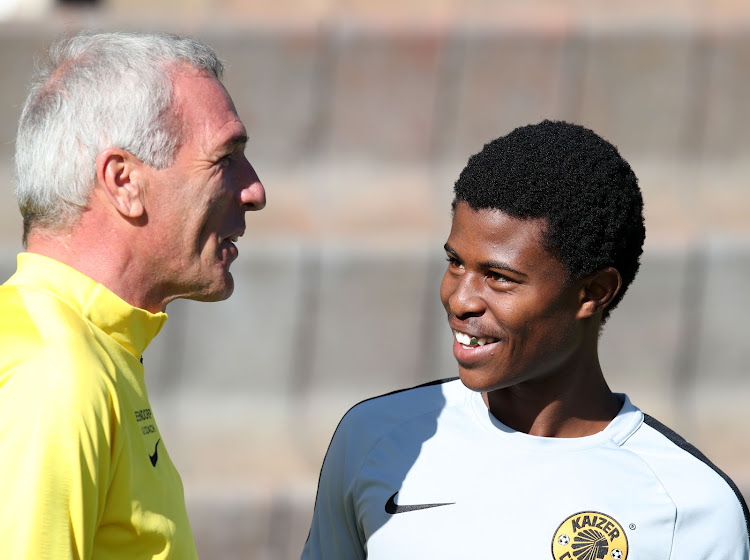 Kaizer Chiefs head coach Ernst Middendorp shares a joke with his exciting young midfielder Happy Mashiane during a session at their training base in Johannesburg on May 15 2019.
Image: Muzi Ntombela/BackpagePix

Ernst Middendorp does not want to dwell too much on the setback it might represent for his second tenure at Kaizer Chiefs if the Soweto giants were to follow up ninth place in the league by losing against a National First Division (NFD) team in the Nedbank Cup final.

Middendorp had even less time to entertain any question over whether he would resign if Chiefs were to suffer an immense‚ but by no means inconceivable‚ shock at the hands of 10-month-old NFD club TS Galaxy in Saturday’s cup final at Moses Mabhida Stadium in Durban.

Chiefs lost their final Absa Premiership match of the season 1-0 against Chippa United in Port Elizabeth on Saturday to slip out of the top eight for a ninth-placed finish‚ which Middendorp admitted after the game was a “disaster” for the Soweto giants.

Amakhosi have a chance to redeem themselves and prevent an unprecedented fourth season without a trophy in Saturday’s Nedbank Cup final.

On the flip side of that‚ should Galaxy pull a famous upset and become the first NFD team to win the Nedbank‚ Middendorp would go from the relief of becoming a coach to end Chiefs’ trophy drought‚ to under pressure going into his first full season in his second stint at Amakhosi.

The coach said that any loss is difficult to contend with‚ especially at Chiefs.

“Life is always difficult in soccer if you lose a game.

"It’s not about finishing in a position that you weren’t really targeting‚” Middendorp said at a pre-cup final media day on Wednesday at Chief’s Village in Naturena.

“But it’s always a difficult situation during the run of the league‚ and with a brand like Kaizer Chiefs‚ for sure.

“But‚ it’s not really something at the moment [to think about]. Let’s respect our own preparation‚ do the best we can do‚ hopefully to make the right decision to get highly committed players onto the field on Saturday to be able to handle the pressure. And then we will see.

“I’m not thinking about ‘in case’ and ‘what’ and ‘when’‚ when we have a very clear target to win this cup.”

A question came‚ which Middendorp did not allow to be finished‚ concerning if things do not go Chiefs’ way on Saturday.

The coach interrupted: “Listen‚ I’m not … don’t approach me with if‚ if‚ if‚ if‚ and again if.

"I think if you want to write something about ‘if’‚ and‚ ‘What’s your option in case of if?’‚ then just do it.

“We have a very clear target. And that’s what we are doing.”

The questioner completed his query‚ which was the inevitable‚ will Middendorp resign if things Chiefs lose on Saturday.

“And I’m not going into it‚ looking into options that you are creating now. Please‚ do me a favour – this is definitely something that I am not answering.”

After some initial promise in the PSL‚ Chiefs’ attention appeared to shift to ending their trophy drought in the Nedbank‚ and concentration waivered in the league.