Conco eager to replicate Diski heroics in the PSL 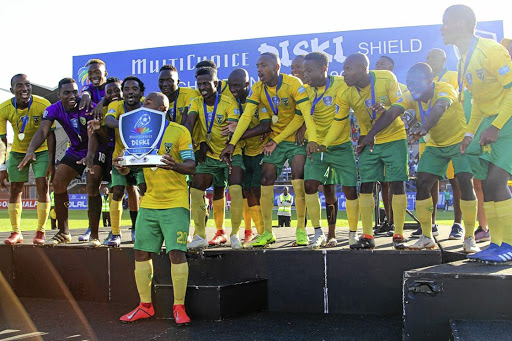 After inspiring Golden Arrows reserves to the MultiChoice Diski Shied (MDS) success, forward Siboniso Conco is eager to replicate his Shield heroics even in the senior team.

"My objective now is to reproduce my reserve league form in the first team next season. I want to be among the top scorers in the Premiership next season," Conco, who scored nine MDS goals," said yesterday.

Conco's brace provided the difference as Arrows clinched the MDS trophy, beating Mamelodi Sundowns 2-1 in the final at Princess Magogo Stadium at the weekend. The Brazilians had struck first through Khomotjo Rachoene.

"I am happy that I helped the team win the MDS for the first time. After winning the MultiChoice Diski Challenge (MDC) twice, we were desperate for the Shield title."

The 23-year-old versatile winger's exploits in the Shield saw him nominated for the player of the tournament gong, alongside teammate Lindani Ndelu and SuperSport United's Kamohelo Mahlatsi.

Kekana‚ Zwane and Lorch nominated for Footballer of the Season award

Mamelodi Sundowns captain Hlompho Kekana will hope the 16 Premier League coaches will pick him for this season's Footballer of the Season award ...
Sport
3 years ago

"It's just a bonus to be nominated for the award, for me the most important thing is that we won the title," Conco said reacting on his Shield player of the tournament nomination.

Having been promoted to the senior side at the start of the just-concluded campaign after being MDC reserve league's top-scorer and player of the season the previous season, Conco started 12 of the 17 matches he played, scoring once.

"I accept that my first top-flight season did not go as I planned, but this display [in the MDS] is one of the things that give me hope that next season I will do well in the PSL," Conco noted.